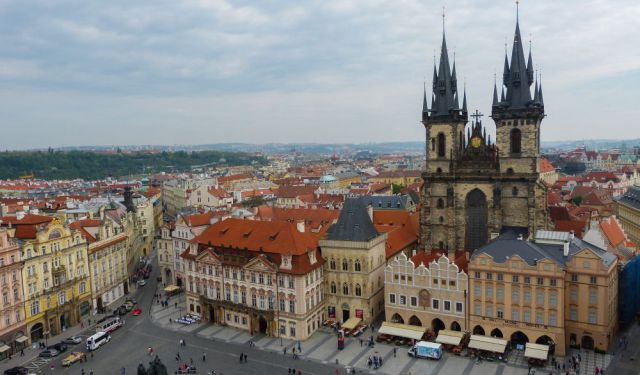 Prague is a delightful city to explore on foot with its extraordinary architecture, charming cobblestone lanes and enchanting churches, squares and buildings. Prague’s history is long and deep which makes this spectacular city even more fascinating. Founded near the end of the 9th century at the crossroads of Europe, “Praha” or the “doorstep” became the seat of the Kings of Bohemia with a thriving marketplace alongside the River Vltava in what today is known as Old Town Square. Merchants and craftsman from all over the world would meet here to trade and by 1234 Prague’s Staré Město “Old Town” was founded.

Old Town revolves around Old Town Square which is laced in history and architectural genius and remains the historic heart and the soul of the city. Many believe it is the grandest, most magnificent square in all of Eastern Europe with its intricate pathways of cobblestone streets reminiscent of medieval times and its brightly-hued pastel buildings each with a history of its own right. ...... (follow the instructions below for accessing the rest of this article).
This article is featured in the app "GPSmyCity: Walks in 1K+ Cities" on iTunes App Store and Google Play. You can download the app to your mobile device to read the article offline and create a self-guided walking tour to visit the attractions featured in this article. The app turns your mobile device into a personal tour guide and it works offline, so no data plan is needed when traveling abroad.