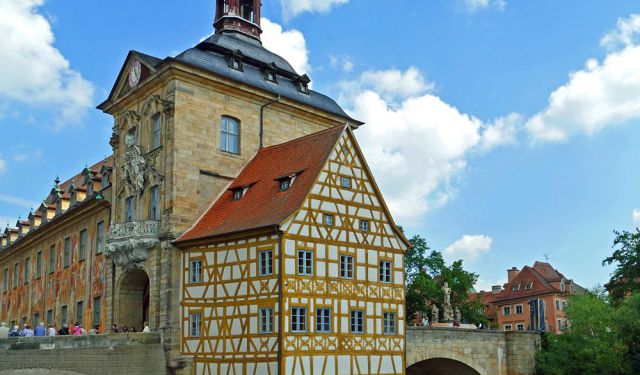 A Walking Tour of the UNESCO Highlights of Bamberg, Bamberg, Germany (B)

Sipping a chilled bottle of smoked beer from Bamberg is a big distraction when trying to write an article. It’s so good it deserves my full attention yet I need to share its deliciousness with you. Like drinking smoky bacon it makes the perfect accompaniment with traditional German sausage, sauerkraut and mashed potato. Sadly it’s the last bottle I brought home with me from Bamberg.

I stepped off the coach on a sunny morning in July and immediately fell for Bamberg. It would be worth visiting this pretty Franconian town for the beer alone but there are plenty other reasons, in particular a staggering 2,000 or so buildings deemed worthy of UNESCO World Heritage status. Despite it being the height of summer while busy, it’s not over crowded.

Photography Tip: A good photographic viewpoint of the town hall is from the bridge immediately south, Geuersworthsteg.

Many years ago (or should that be once upon a time) the citizens of Bamberg could not agree where to build their town hall. The gentry wanted it built on their side of the river while the poor folk living on the opposite bank wanted it built there. By way of compromise, having first built an island to stand it on, they built it in the middle of the river. And everyone lived happily ever after. ...... (follow the instructions below for accessing the rest of this article).
This article is featured in the app "GPSmyCity: Walks in 1K+ Cities" on iTunes App Store and Google Play. You can download the app to your mobile device to read the article offline and create a self-guided walking tour to visit the attractions featured in this article. The app turns your mobile device into a personal tour guide and it works offline, so no data plan is needed when traveling abroad.