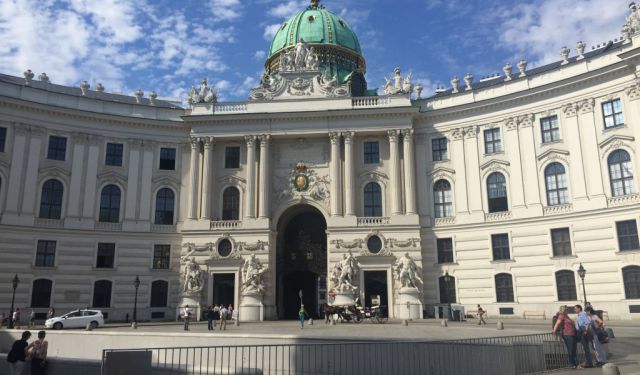 A Weekend in Vienna, Vienna, Austria (B)

I had a fantastic time in Vienna last weekend. It’s been a place I’ve wanted to visit for ages – I even mentioned this in a Bucket List blog post back in 2012, but it’s taken me four years to realise the dream. In the end it came about because my daughter was heading there for a work conference (she’s an academic) and invited me to spend the preceding weekend with her in the Airbnb she’d booked for her stay. I wrote a daily journal for the blog while there, but here’s my roundup of what’s great about Vienna and what to do there. Necessarily, it’s only a first glimpse at all Vienna has to offer. A weekend really isn’t nearly enough time to fit in even a large part of what one might want to do. But at least it’s a start and of course I’m really hoping it won’t be too long before I go back to do more.

Vienna, Austria’s capital, has much to offer historically, artistically, intellectually and culturally. In 2001 its old centre became a UNESCO World Heritage Site. Vienna was the seat of the Austro-Hungarian Empire and the Habsburg dynasty and is full of vast imperial palaces that you can visit. Its architecture is impressive and bold, slightly pompous, more a symbol of its power, I think, than buildings designed for beauty. It’s a fairly small capital city and thus easily manageable for a weekend – although there’s so much to do you might well want to be there longer! This is the home of Sigmund Freud so one could say it’s where psychotherapy was born; composers such as Beethoven and Mozart lived here, and of course Strauss – all those Viennese waltzes we know so well. There’s a rich history of art too. Vienna’s most famous artist is Gustav Klimt and seeing his famous, ‘The Kiss’, painting is almost mandatory. But Egon Schiele and others lived and worked here too. Intellectuals, writers and political giants came too, like Trotsky and Lenin. Even Hitler hung out here. ...... (follow the instructions below for accessing the rest of this article).
This article is featured in the app "GPSmyCity: Walks in 1K+ Cities" on iTunes App Store and Google Play. You can download the app to your mobile device to read the article offline and create a self-guided walking tour to visit the attractions featured in this article. The app turns your mobile device into a personal tour guide and it works offline, so no data plan is needed when traveling abroad.