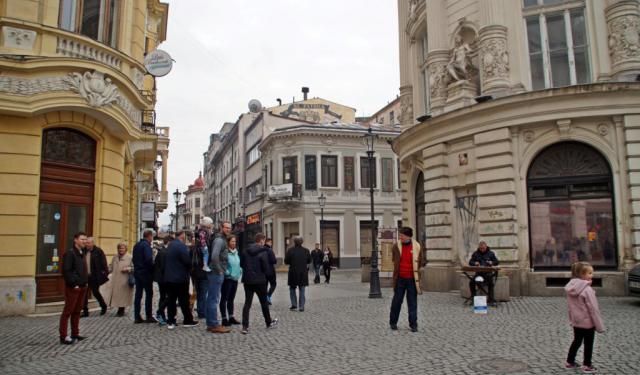 We arrived at our hotel, Ibis Hotel Palatul Parlamentului, in the early evening of March 10th, dropped off our stuff and then went out to explore Bucharest by night with one important mission – to get something to eat!

We had chosen Bucharest as our destination for the weekend for reasons of it being cheap, a more or less undiscovered city and a great base for exploring the more mountainous regions of Romania. Bucharest is the capital and largest city of Romania with 2 million inhabitants, and is thus the 6th largest city in the European Union. Bucharest is a bustling city, which was known as “The Little Paris”, before the recent big change in infrastructure and architecture, which has made the city an interesting mix of old and new. We were excited to explore this undiscovered Eastern European capital! We walked past the Palace of Parliament, and I was simply in awe! The building is SO huge, I couldn’t get my eyes from it! Actually, it’s the biggest parliament building in the world, and I don’t think there’ll ever be one to overtake it – it’s GI-freaking-NORMOUS! It has 12 stories, 3,100 rooms and it covers an area of over 330,000 sq m! It was built in 1984 by Nicolae Ceausescu (a Romanian Communist leader from 1965 to 1989), and at the same time, 1/9 of Bucharest was reconstructed to accommodate the massive building and its surroundings. ...... (follow the instructions below for accessing the rest of this article).
This article is featured in the app "GPSmyCity: Walks in 1K+ Cities" on iTunes App Store and Google Play. You can download the app to your mobile device to read the article offline and create a self-guided walking tour to visit the attractions featured in this article. The app turns your mobile device into a personal tour guide and it works offline, so no data plan is needed when traveling abroad.