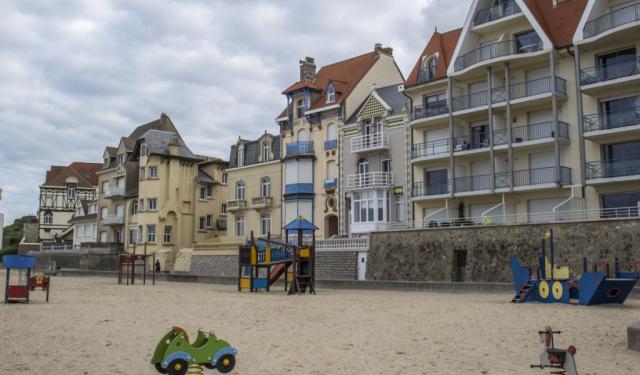 A Whimsical Wander through Wimereux, Wimereux, France (B)

If, like me, you appreciate the architecture of the Belle Époque era the forerunner of Art Nouveau, Wimereux is the place for you. This pretty resort is peppered with beautiful houses from this period including a parade of beach huts.

Wimereux on the Opal Coast in Northern France was a small fishing village until Napoleon Bonaparte decided to build a port there in 1803 in anticipation of his invasion of England. It was here, specifically at the pre-historic site of Point Aux Oies, that Napoleon III landed when he arrived to claim the throne of France. This small hamlet flourished when it became a stop on the Paris to Calais train line in 1867. It soon became a popular destination for the wealthy from France and England which resulted in a rapid growth of hotels and villas. Its popularity declined after the First World War but was revived by the construction of the Digue Espace in 1927 which continues to feature exhibitions by artists on its promenade, La Digue.

Wimereux, is the oldest and most traditional seaside resort on the Opal Coast. Little has changed since it was established at the end of the nineteenth/beginning of the twentieth century and it has a good selection of the stylish villas built as holiday homes during this period. In particular its wide seawall promenade, known as Digue, is lined with French Anglo-Normand buildings (the same period as the Victorian period in England buildings interspersed with some from the succeeding Belle Époque era. This harmonious mixture of styles is best appreciated by an evening stroll as the sun sets over the sea. These buildings are all privately owned although some house restaurants and small hotels. One of the most impressive and worth a visit is the villa Les Mauriciens. The unusual roof and façade of this remarkable building have been renovated and restored since it was classified as an historic monument. It was built around 1897 by the famous English architect, John Belcher,and is the only work attributed to him in France. Built in the neo-Baroque style it has rich, decorative interiors and is surrounded by a park. Although it is a private house some architectural tours (in English on request) are offered by the association Le C harme de Wimereux, ...... (follow the instructions below for accessing the rest of this article).
This article is featured in the app "GPSmyCity: Walks in 1K+ Cities" on iTunes App Store and Google Play. You can download the app to your mobile device to read the article offline and create a self-guided walking tour to visit the attractions featured in this article. The app turns your mobile device into a personal tour guide and it works offline, so no data plan is needed when traveling abroad.