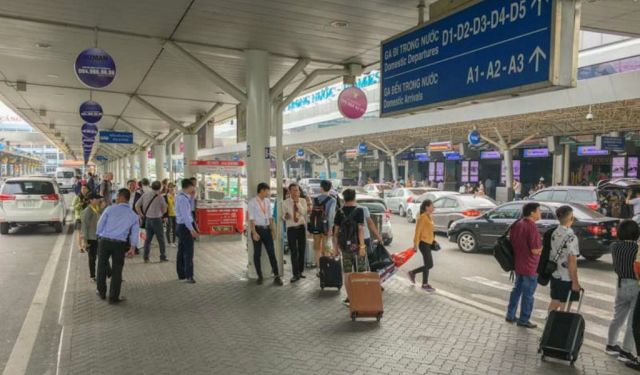 Ho Chi Minh city (Saigon) is the largest city and the economic/financial centre of Vietnam. The city is served by Tan Son Nhat International Airport (SGN), which is the busiest airport in Vietnam. For first-time travellers to Vietnam, it can be stressful to navigate thru the various public transport modes in the country. With tales of foreign travellers getting rip-off on taxis and public buses common in online forums. Luckily, most travellers can avoid the pitfalls with some online research and following the advices of other travellers.

Any seasoned traveller worth their salt can tell you that land transports to/from airports are especially prone to burning a hole in your pocket. For those flying into Tan Son Nhat International Airport, the most cost-effective and convenient way of getting to the city is via the airport bus. Here, we’ll share with you how to take the airport bus to Ho Chi Minh City.

Airport bus ticket booth at Tan Son Nhat International Airport, domestic terminal, column B-04. For service No.49 and No.109. ...... (follow the instructions below for accessing the rest of this article).
This article is featured in the app "GPSmyCity: Walks in 1K+ Cities" on iTunes App Store and Google Play. You can download the app to your mobile device to read the article offline and create a self-guided walking tour to visit the attractions featured in this article. The app turns your mobile device into a personal tour guide and it works offline, so no data plan is needed when traveling abroad.