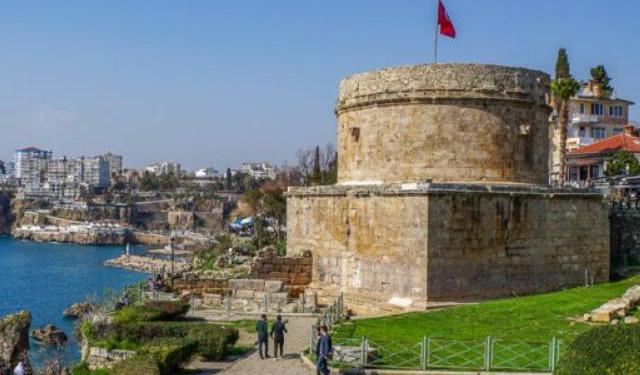 All about Antalya, Antalya, Turkey (B)

Antalya was originally founded by King Attalus II of Pergamon around 150 BC and was called Attalia for the King. It soon became part of the Roman Empire and prospered until the fall of Constantinople. The Seljuk Turks captured the city in 1207 which fell to the Ottomans in the mid 1300’s. It remained under Ottoman control until World War I when the city was briefly given to Italy before the Turkish Republic recaptured Antalya during the War of Independence.

Had I realized all its history I might not have been surprised about the size of the city. Antalya is the fifth most populous city in Turkey and the largest on the Mediterranean Coast. A larger international sea resort, Antalya attracts many tourists. I suppose I would have known more had I planned to visit Antalya on my own, but instead I took a two-week tour with G Adventures, a budget minded National Geographic Company.

While we visited Antalya, we stayed at Hotel Argos in the old city, Kaleiçi. While it was very conveniently located, reasonably priced, and had the first comfy bed during my stay in Turkey, a Karaoke bar with EXTREMELY loud music a few blocks away made sleeping difficult even with earplugs. As a result, when staying in Kaleiçi, I recommend selecting hotels near popular venues very carefully! ...... (follow the instructions below for accessing the rest of this article).
This article is featured in the app "GPSmyCity: Walks in 1K+ Cities" on iTunes App Store and Google Play. You can download the app to your mobile device to read the article offline and create a self-guided walking tour to visit the attractions featured in this article. The app turns your mobile device into a personal tour guide and it works offline, so no data plan is needed when traveling abroad.