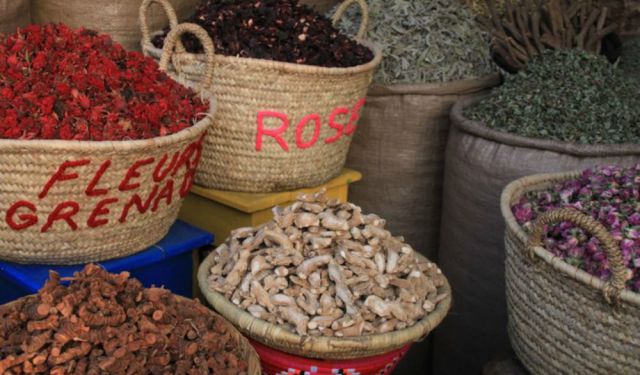 Despite not so good food on the plane, our we enjoyed timely and unventful travels to Marrakesh, Morocco. This is always nice with multiple connections and checked bags. Our biggest delay occurred when we arrived at the very nice new terminal and our driver was not there to pick us up to take us to our riad in the Marrakesh medina!

Suman had reserved a ride through the riad in which we were staying, and after a few phones calls and 45 minutes of waiting, our ride finally showed up. I don’t know what took so long as the airport isn’t that far away from the old city center also known as a medina.

A medina is a specific city section found in many North African cities which are typically walled with many narrow and maze-like streets. Marrakesh medina is no exception. Thick-walled, interconnecting buildings lined cobblestone streets which zigzagged in every direction. Once designed to confuse invaders, the Marrakesh medina now just confuses tourists!

Thankfully we had a driver that knew the location of our riad, as we would have been hard pressed to find it with few streets signs and derbs (or alleyways) pointing in every direction. The car was too large to make it down the narrow streets, so we were met by a baggage porter who wheeled our luggage in an old cart to Riad Karmelawhere we were staying for one night. ...... (follow the instructions below for accessing the rest of this article).
This article is featured in the app "GPSmyCity: Walks in 1K+ Cities" on iTunes App Store and Google Play. You can download the app to your mobile device to read the article offline and create a self-guided walking tour to visit the attractions featured in this article. The app turns your mobile device into a personal tour guide and it works offline, so no data plan is needed when traveling abroad.