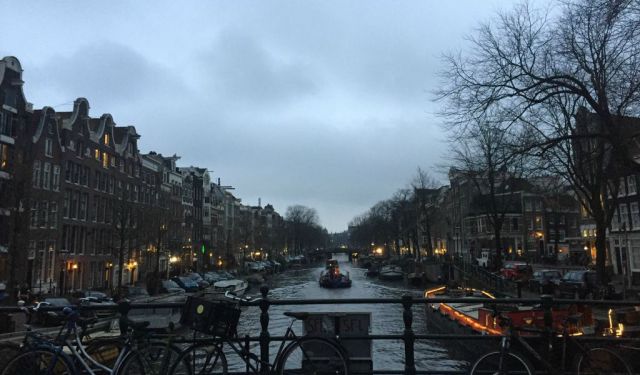 Amsterdam at Night and Favourite Haunts, Amsterdam, Netherlands (B)

Here I am in Amsterdam for the 5th year running early in the year. Why do I keep coming back? Because I love it! And short of travelling far and spending lots of money, there aren’t many options in January. Better to come to somewhere that’s great with lots of things to do and not worry too much about the weather than chance finding a pale shadow of warmth further south in a seaside resort that’s almost dead in the winter. Amsterdam is always alive and kicking. Even in January. But it has to be said that it’s less busy than later in the year, particularly spring – March and April – when tourists flock here to see the bulbs, all those ‘tulips from Amsterdam’. And that’s partly why I like to come now. It’s quiet and full of locals.

I don’t come to Amsterdam to sightsee, I come simply to be here. I’ve spent a lot of time in the city over more than 20 years, almost semi living here at one time, so there’s a wonderful sense of familiarity. I think places we return to over and over again imbed themselves in our psyche and just as people are drawn to always return to their home, the place they were born and brought up, so too we are drawn to the places we come to know well. Or we do when we love them. ...... (follow the instructions below for accessing the rest of this article).
This article is featured in the app "GPSmyCity: Walks in 1K+ Cities" on iTunes App Store and Google Play. You can download the app to your mobile device to read the article offline and create a self-guided walking tour to visit the attractions featured in this article. The app turns your mobile device into a personal tour guide and it works offline, so no data plan is needed when traveling abroad.