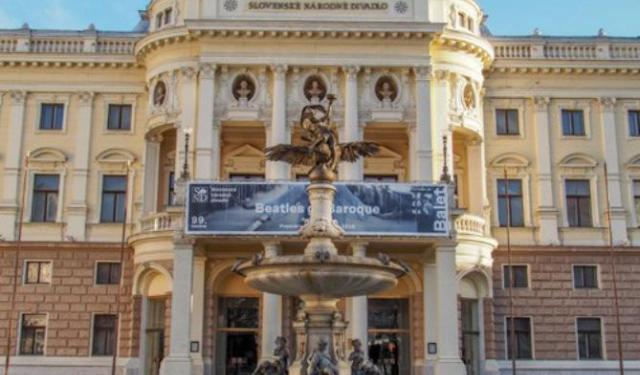 Bratislava, the capital of Slovakia, was founded by the Celts in the 2nd century BC. Being close to the Austria Hungarian border, Bratislava was subject to many power struggles. Bratislava served as capital of Hungary from 1574-1784 during the Ottoman rule before the Austro-Hungary Monarchy reigned. In the early 1900’s the Czechs and Slovaks declared the creation of Czechoslovakia and Bratislava became a part of this country. After World War II, Czechoslovakia fell under communist rule. The new country Slovakia was created in 1993. Bratislava, with a population of 450,000, is Slovakia’s largest city. It occupies both banks of the Danube River. The city’s lovely Old Town, that is easily walkable, is on the north side of the river.

We started off on a cold, yet sunny day from port across from the SNP Bridge. The SNP Bridge, also known as the Bridge of the Slovak National Uprising took five years to build between 1967 and 1972. The bridge is suspended from only one pylon on the south bank of the Danube. On the top of the pylon is a saucer shaped restaurant that affords sweeping views of the city. ...... (follow the instructions below for accessing the rest of this article).
This article is featured in the app "GPSmyCity: Walks in 1K+ Cities" on iTunes App Store and Google Play. You can download the app to your mobile device to read the article offline and create a self-guided walking tour to visit the attractions featured in this article. The app turns your mobile device into a personal tour guide and it works offline, so no data plan is needed when traveling abroad.