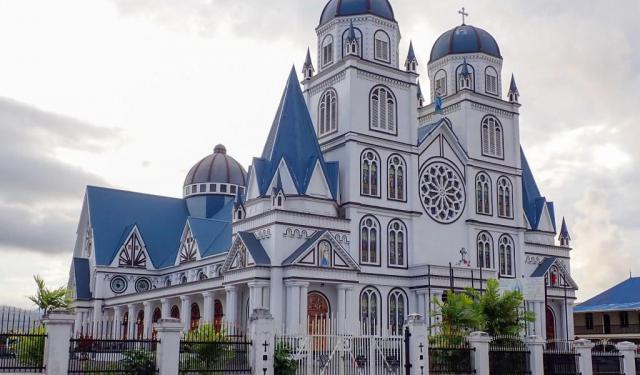 Around Apia, Apia, Western Samoa (B)

Samoa, once part of a larger island chain, was given to the Germans during the Tripartite Convention of 1899. At this time it became known as Western Samoa, though “Western” was dropped in 1997.

The archipelago is made up of ten islands though half are uninhabited. Savai’i is the largest island while Upolu is the most populated. The aforementioned are the most visited and four of the uninhabited islands are situated off the east coast of Upolu and comprise the Aleipata Islands which may be visited by boat.

The international airport is on the island of Upolu, where I began my trip, though I actually flew into the smaller airport, Fagali’i, as I came from American Samoa on Samoa Airways. What an experience!

I checked in at the desk in the open-air airport with an over weight dive bag (only 44 pounds are allowed). I tried paying in advance online, however, the airline didn’t include information on over weight luggage between the islands, only to larger destinations like Australia and New Zealand. ...... (follow the instructions below for accessing the rest of this article).
This article is featured in the app "GPSmyCity: Walks in 1K+ Cities" on iTunes App Store and Google Play. You can download the app to your mobile device to read the article offline and create a self-guided walking tour to visit the attractions featured in this article. The app turns your mobile device into a personal tour guide and it works offline, so no data plan is needed when traveling abroad.