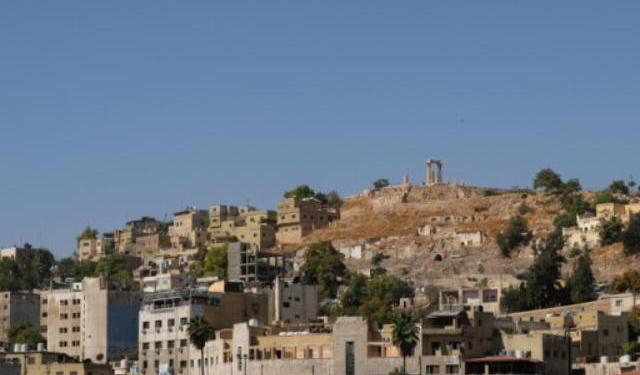 Walking through the hot, sultry streets of Al Balad in the heart of Amman, feels like an assault again the senses. The smell of a potpourri of spices tickled my nose while my eyes danced around the endless array of shops in every direction. Colorful handmade embroidered dresses called thobes dangled from the open storefront walls. Plastic China-made toys scrambled across the already congested sidewalk pavement. Giant fabric buckets of frankincense, dates, olives, and figs baked in the hot afternoon sun while cars sped by stopping abruptly if a pedestrian dared to cross the street in a city without any noticeable crosswalks. The sound of cars honking, the dance of Arabic words and the distant call to prayer by the Muezzin reminded me that I was in a place unlike anywhere I’d ever been before. It was my first day in Jordan and I was struck with some serious culture shock.

I had arrived at the ultra-modern newly renovated Queen Alia International Airport only eight hours earlier after almost 24 hours of travel from my home in Minnesota to the Hashemite Kingdom of Jordan. I recall landing at almost midnight in the blackness of the night wondering where on earth I was. I had never been to the Middle East before and the suspense would have to wait a few more hours until sunrise to see what it was all about. I was met by a driver from my hotel and was instantly welcomed into the Jordanian culture of warmth and hospitality. Despite my fatigue, we talked the entire thirty-minute drive to the hotel and I received my first introduction to the welcoming, open culture of Jordan. I checked in at the Grand Palace Hotel close to one in the morning, fell into a deep, luxurious sleep and rose with a start by seven. It was my first day in Jordan and I didn’t want to waste a minute sleeping (even though my body would have preferred it). ...... (follow the instructions below for accessing the rest of this article).
This article is featured in the app "GPSmyCity: Walks in 1K+ Cities" on iTunes App Store and Google Play. You can download the app to your mobile device to read the article offline and create a self-guided walking tour to visit the attractions featured in this article. The app turns your mobile device into a personal tour guide and it works offline, so no data plan is needed when traveling abroad.