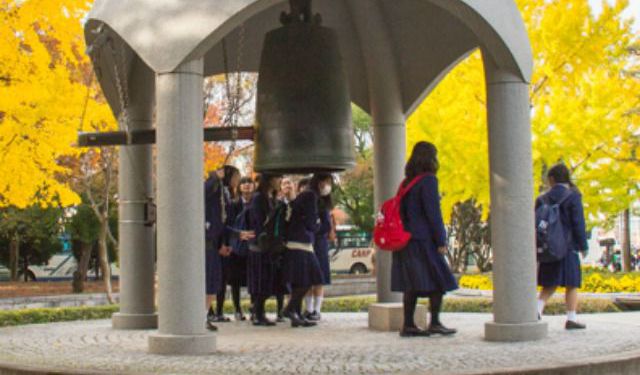 Stepping off the tram at the “Peace Park”:http://www.japan-guide.com/e/e3400.html in Hiroshima http://visithiroshima.net I had no idea what to expect, or even, why I was there. I was immediately struck by the stark reality of the disaster that struck the city on seeing the Atomic Dome (Genbaku Dome) with its shredded dome. It was the only building left standing when the first atomic bomb exploded in the centre of the town on 6 August 1945. This building, the Hiroshima Prefecture Commercial Exhibition Hall, has been preserved in the same state it was immediately after the bombing. The respectful silence of all the visitors surrounding it was very moving.

On the other side of the river the atmosphere in the Peace Park was completely different. This large wooded area is home to some interesting monuments each with its own poignant significance. The Children’s Monument was, appropriately, surrounded by school children learning the meaning of this unusual structure and the significance of the bell inside which is shaped like a crane. This bird, derived from the ancient Japanese tradition of origami (paper folding) has come to be known as a symbol of peace. Cranes are folded as a wish for peace around the world. The connection between paper cranes and peace can be traced back to a girl named Sadako Sasaki. At the age of two she was exposed to the A-bomb but at the time she had no apparent injuries. Nine years later she was diagnosed with leukaemia. She believed that folding cranes would aid her recovery and she kept folding them until she died eight months later. Her death sparked a campaign to build a memorial for all the children killed by the atomic bomb and a place to pray for world peace. It is both a sad and happy place – especially during school visits. Wave upon wave of children with their excited chatter and the bright coloured baseball caps (each school had a different colour) flooded past as I stood there. Standing still, I discovered, had its consequences. All the children had a project to do – ask visitors to the park to write a message about peace for them. For each message written the author was given a present which was a tiny origami crane stuck to a hand-made bookmark. It made my day. The children read their request in English – often punctuated by giggles – and when the gift had been present departed with a chorus of thanks and goodbyes. Their presence made my day. During my visit I collected seven presents which I will ...... (follow the instructions below for accessing the rest of this article).
This article is featured in the app "GPSmyCity: Walks in 1K+ Cities" on iTunes App Store and Google Play. You can download the app to your mobile device to read the article offline and create a self-guided walking tour to visit the attractions featured in this article. The app turns your mobile device into a personal tour guide and it works offline, so no data plan is needed when traveling abroad.