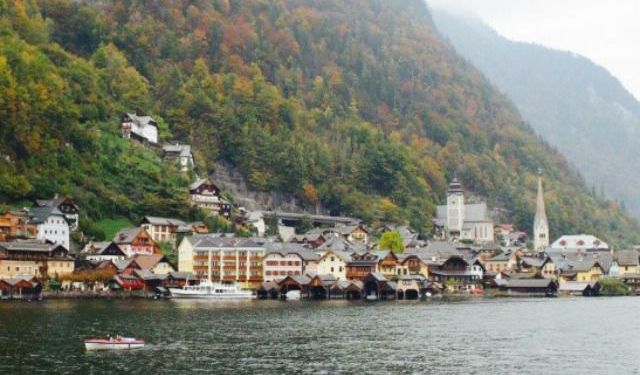 Hallstatt, Austria is one of those idyllic towns that ends up on those “must-see-before-you-die” lists as being one of the most beautiful towns to bless this planet. And rightly, so! It has just been one of those towns I saw over and over again on all forms of social media, with picture perfect captures and I couldn’t wait to go one day, aching in my travelous heart until the itch had been scratched.

Located in a remote part of Austria along the banks of the Hallstätter See in the Salzkammergut region, this tiny town has managed to survive through centuries of isolation thanks to the salt that has been mined here even as early as 3000 B.C., making it the world’s oldest salt mine. Hallstatt became a UNESCO World Heritage site in 1997

We had originally planned to use our tickets to go up the Jennerbahn at Königssee, but the weather was incredibly foggy and it would have been impossible to see anything. So, we decided to make a last minute, sporadic decision to drive the extra hour across the border from Germany to go to Hallstatt. And it turned out to be the best decision EVER! Not only was the town already incredibly picturesque, but autumn had already begun to set in, adding to the majestic beauty of the town. ...... (follow the instructions below for accessing the rest of this article).
This article is featured in the app "GPSmyCity: Walks in 1K+ Cities" on iTunes App Store and Google Play. You can download the app to your mobile device to read the article offline and create a self-guided walking tour to visit the attractions featured in this article. The app turns your mobile device into a personal tour guide and it works offline, so no data plan is needed when traveling abroad.