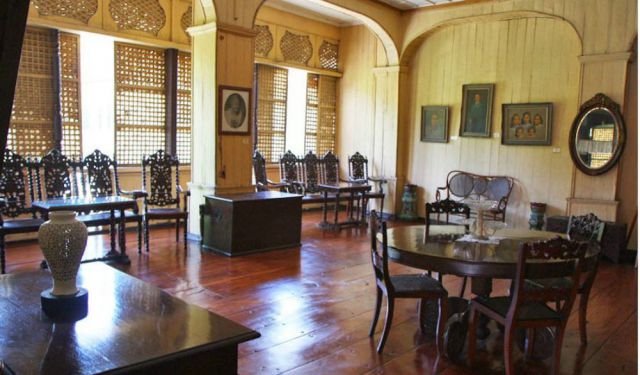 Back in Time in the Town of Taal, Taal, Philippines (B)

Two things I knew of my Batangas trip: my flights dates and how to get to Batangas from Pasay. Nothing more. I had left all the planning to my good Batangueño friend.

It was only on the first day that I had learned of our itinerary. He had plotted out a clockwise route from Lipa, Batangas and our first stop was the historic town of Taal. Just how historic it was I had no clue, until I stepped off the jeep that had stopped a short distance from Basilica of Saint Martin of Tours.

The church was built in 1575, rebuilt in 1642, destroyed by the eruption of Taal Volcano in 1754, relocated and rebuilt in its present location in 1755, then destroyed by an earthquake in 1849. The Basilica that is standing now was built in 1856 (completed in 1878) and is said to be the largest in Asia.

In front of the largest church in Asia is a massive bell, which took residence at the belfry up until 1942 when it fell because of an earthquake. What resides now at the bell tower aside from bats?  ...... (follow the instructions below for accessing the rest of this article).
This article is featured in the app "GPSmyCity: Walks in 1K+ Cities" on iTunes App Store and Google Play. You can download the app to your mobile device to read the article offline and create a self-guided walking tour to visit the attractions featured in this article. The app turns your mobile device into a personal tour guide and it works offline, so no data plan is needed when traveling abroad.

Create Your Own Self-Guided Walks in Taal
Guide Name: Back in Time in the Town of Taal
Guide Location: Philippines » Taal
Guide Type: Self-guided Walking Tour (Article (B))
Author: Mustachio Ventures
Read it on Author's Website: http://mustachioventures.blogspot.md/2015/02/historical-town-taal-batangas.html
Sight(s) Featured in This Guide: