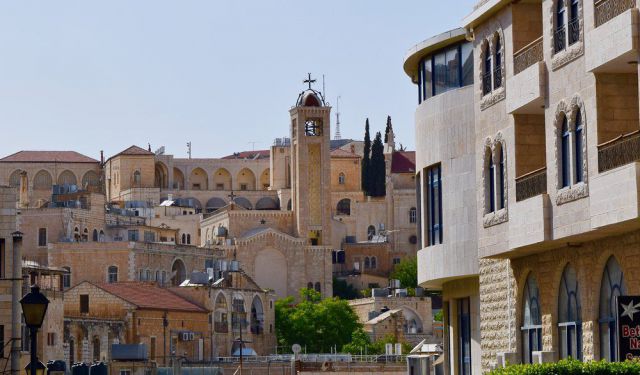 Best of the West Bank: Bethlehem, Bethlehem, Palestinian Authority (B)

We continued our way towards the city of Bethlehem, not without first stopping to admire the Flower Thrower, one of the many paintings by the elusive British artist Banksy.

Banksy has used the West Bank in multiple occasions as the setting for his paintings, many of them with a very strong political message. If you're a fan of Banksy or street art in general, you won't be disappointed.

As we arrived in Bethlehem, I realised that the city had absolutely nothing to do with the small village depicted in the Bible and that we're used to seeing in Christmas paintings. Modern Bethlehem is a buzzing and modern city with a population of over 25,000, clearly much different than the small village of shepherds from the New Testament, but equally fascinating.

It was here where Jesus was allegedly born and as such, the main highlight of the city is the Church of the Nativity.

The church was built in 327 by Constantine the Great and his mother Helena above the cave where it was believed that Jesus was born. The church was rebuilt, modified and enlarged on multiple occasions over the centuries. ...... (follow the instructions below for accessing the rest of this article).
This article is featured in the app "GPSmyCity: Walks in 1K+ Cities" on iTunes App Store and Google Play. You can download the app to your mobile device to read the article offline and create a self-guided walking tour to visit the attractions featured in this article. The app turns your mobile device into a personal tour guide and it works offline, so no data plan is needed when traveling abroad.