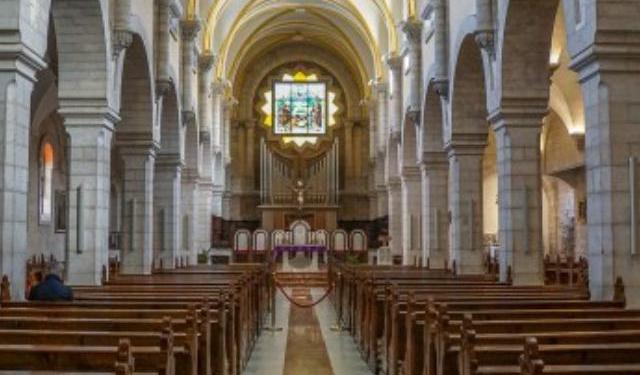 Bethlehem and the West Bank, Bethlehem, Palestinian Authority (B)

In order to get to Bethlehem, visitors must travel through the West Bank. For tourists, passing through the Israeli check point is generally problem free, but it is best to carry identification in case of a search.

While the West Bank is located on the east side of Israel, before the 1948 Arab-Israeli war, it was under Jordanian control. As a result, it’s name refers to being located on the West Bank of the Jordan River. Now the West Bank territory is part of the Palestinian National Authority but it is occupied by Israel, meaning the Israeli government controls the borders and supplies water and other utilities. This is the result of multiple events which include:

3. 1987-1991 – the First Intifada, a Palestinian rebellion in opposition of the Israeli military which led to the 1993 Oslo Accords.

4. 1993 – the Oslo Accords which established the Palestinian National Authority in an effort to create a peaceful two state option.

5. 2000-2005 – the Second Intifada, filled with many suicide bombings, which led to the construction of the Israeli West Bank barrier and Israeli occupation. ...... (follow the instructions below for accessing the rest of this article).
This article is featured in the app "GPSmyCity: Walks in 1K+ Cities" on iTunes App Store and Google Play. You can download the app to your mobile device to read the article offline and create a self-guided walking tour to visit the attractions featured in this article. The app turns your mobile device into a personal tour guide and it works offline, so no data plan is needed when traveling abroad.