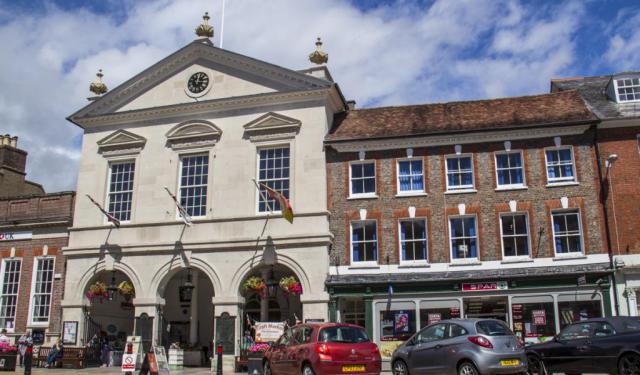 In 1731 a great fire swept through the small market town of Blandford Forum in Dorset. It destroyed ninety per cent of the town. Thanks to some unusual circumstances it was quickly rebuilt and today it is the best example of a small Georgian town in the UK.

During the mid-eighteenth century there were several town fires in Dorset which were generally attributed to the abundance of thatched roofs. They were not considered newsworthy for the London papers – with the exception of the Great Fire in Blandford Forum. Thanks to several wealthy landowners who lived close to the town it was reported as a national disaster. Donations were received from George II, charitable performances were held in a London theatre and an Act of Parliament was passed decreeing that Blandford should be re-built in brick and tile. William and John Bastard, prominent citizens of the town as well as being architects, surveyors and principal builders undertook the task of re-building the town. The result is a spacious Market Place where open-air markets are still held every Thursday and Saturday ringed by the most complete group of Georgian buildings in England. The Market Place is also the venue for a Farmers’ Market on the second Friday of every month. The Great Fire Monument stands in front of the church. ...... (follow the instructions below for accessing the rest of this article).
This article is featured in the app "GPSmyCity: Walks in 1K+ Cities" on iTunes App Store and Google Play. You can download the app to your mobile device to read the article offline and create a self-guided walking tour to visit the attractions featured in this article. The app turns your mobile device into a personal tour guide and it works offline, so no data plan is needed when traveling abroad.