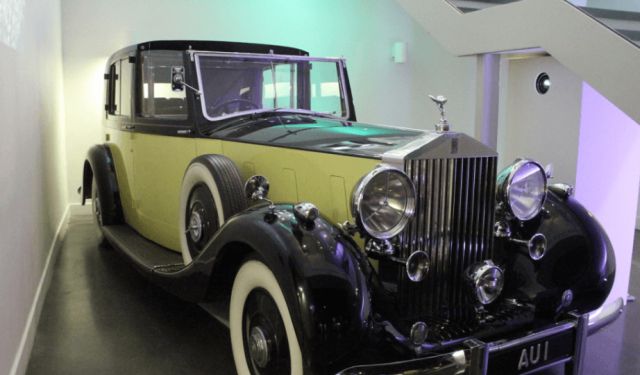 Bond in Motion, London, England (B)

Now on view at the London Film Museum is Bond in Motion, a must-see exhibition that traces the history of the franchise through the many vehicles (cars, boats, motorbikes, sleds, jets, helicopter and more) that James Bond used over the years.

I’m a huge Bond fan, but I hadn’t heard about this exhibition until I spotted an ad at a tube station in London in August. It didn’t disappoint.

As you walk into the museum, you can’t miss a helicopter hanging from the ceiling. My first thought was that it was the same one from which Major Onatopp, one of the villains in GoldenEye (1995), rappelled down to catch James Bond (Pierce Brosnan) in a chokehold. But I found out that it was from Skyfall (2012).

Also on the upper mezzanine are concept art and storyboards which have never been seen before. It was exciting to see each frame of this scene in From Russia with Love(1963) one of my favorites, detailed on paper.

Down the stairs (you can also take an elevator) to the lower level are the vehicles – 50 of them. If you love cars, this is the place to go. ...... (follow the instructions below for accessing the rest of this article).
This article is featured in the app "GPSmyCity: Walks in 1K+ Cities" on iTunes App Store and Google Play. You can download the app to your mobile device to read the article offline and create a self-guided walking tour to visit the attractions featured in this article. The app turns your mobile device into a personal tour guide and it works offline, so no data plan is needed when traveling abroad.