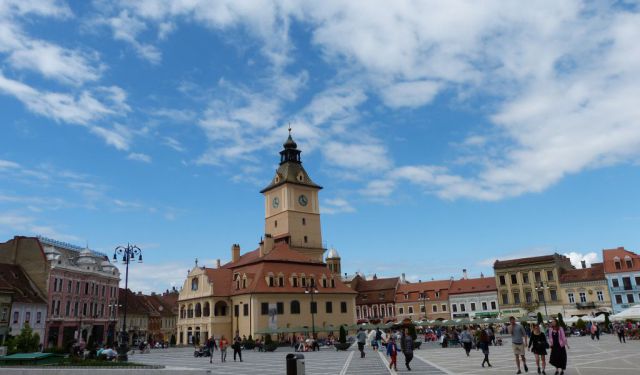 Brasov: The Heart of Romania, Brasov, Romania (B)

Tucked majestically beneath the verdant hills of the Southern Carpathian Mountains in Central Romania lies the historic charming city of Brasov, one of Romania’s most visited cities. Awash with gothic, barque and renaissance architecture, this once walled city is one of the loveliest cities in all of Transylvania.

Brasov was founded on an ancient Dacian site in the 13th century at the crossroads of trade routes linking the Ottoman Empire and the rest of Europe. A thriving German mercantile community of skilled craftsmen enabled Brasov to dominate the economical life and importance of the region during medieval times. Beautiful churches and colorful buildings were built along with fortifications to protect the city against invaders. Parts of the 15th century wall still exist as well as a couple of lookout towers.

Today, Brasov remains a charming city to wander and explore, enjoying its stunning architecture, its delightful bohemian walking streets and mass of fabulous outdoor restaurants and cafes. It is also an excellent launching off point to many hiking trails and day trips to medieval castles in Transylvania. I found Brasov delightful and the perfect place to base ourselves for the majority of our stay in Romania. ...... (follow the instructions below for accessing the rest of this article).
This article is featured in the app "GPSmyCity: Walks in 1K+ Cities" on iTunes App Store and Google Play. You can download the app to your mobile device to read the article offline and create a self-guided walking tour to visit the attractions featured in this article. The app turns your mobile device into a personal tour guide and it works offline, so no data plan is needed when traveling abroad.