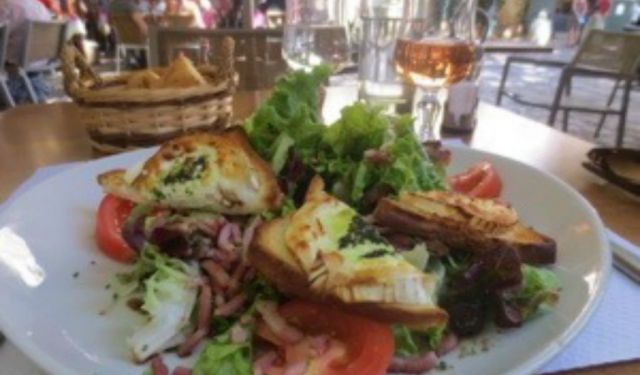 Breakfast in the Market Place and Cezanne's Studio, Aix-en-Provence, France (B)

I went back to Bar de l’Horloge for Le petit Dejeuner this morning. What a bargain it was at €4.90: freshly squeezed orange juice, coffee, tartine and croissant. Added to this, I had a great view of the food market in Place Richelme coming to life. There were some different stalls today. A wonderful cheese stall with a vast range of little goats’ cheeses and a bright green cheese flavoured with pistou. The stall holder gave me a taste and it was delicious.

My plan for the day was to visit Cezanne’s Studio a little way north of the centre of the city. From where I’m staying and the food market, it wasn’t too long a walk, but a slight incline all the way.

I arrived 5 minutes before it opened at 10am. I was teased about not having pre booked but fortunately it wasn’t really a problem. No photos were allowed inside, which was a shame, though understandable.

Cezanne (1839-1906) was born, mainly lived and died in Aix en Provence. His importance as an artist, bridging a link between late 19th century Impressionism and early 20th century Cubism was enormous, and he strongly influenced other artists like Matisse and Picasso. However, the famous son of Aix was not appreciated by his fellow citizens and he was even disapproved of. When his mother died he was forced to sell the family house and rented a flat in town but created a studio in a house on a hill just outside Aix. After his death the house was left untended and was only saved from demolition by two Americans. Now the town of Aix are more than appreciative of Cezanne and 70,000 tourists visit the studio each year. ...... (follow the instructions below for accessing the rest of this article).
This article is featured in the app "GPSmyCity: Walks in 1K+ Cities" on iTunes App Store and Google Play. You can download the app to your mobile device to read the article offline and create a self-guided walking tour to visit the attractions featured in this article. The app turns your mobile device into a personal tour guide and it works offline, so no data plan is needed when traveling abroad.