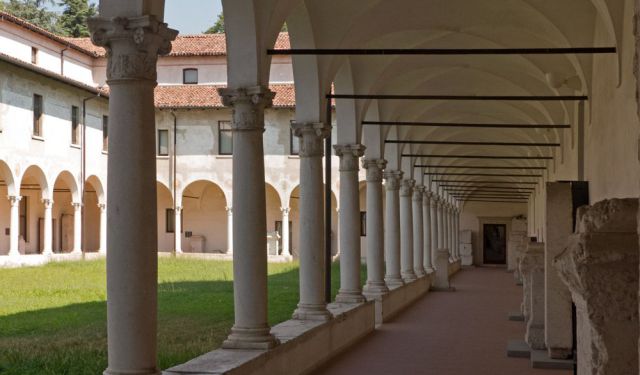 According to my guidebook, Brescia is “disappointing”. But we wanted a day out from Verona, and Brescia was an easy trip by train. So, not knowing quite what to expect, we went anyway, and we were not at all disappointed. We found Roman remains, a UNESCO World Heritage Site and all the piazzas, churches and museums that you’d expect in an Italian city.

Even if it had nothing else, Brescia would be worth visiting just for the City Museum, housed in a site that encompasses a monastery, churches, Roman remains and an art gallery. Together with the city’s Roman ruins, the Museum is part of the UNESCO World Heritage Site grandly named Longobards of Italy, Places of Power 568-774. This recognises the Longobard influence on early Christianity and architecture and includes seven sites across the whole of Italy (including the Basilica of Monte Sant’Angelo, which we visited last year).

The City Museum, also known as Santa Giulia, occupies the site of an 8th century convent, itself built on top of a Roman road and a number of Roman houses. It also includes later additions to the convent. The result is a dazzling and eclectic mix of art and architecture. Following a strict itinerary through the museum (necessary so that you don’t miss anything) you pass through the convent and on to the Renaissance Cloister. Then to the Church of San Salvatore, an important example of late Longobard architecture. For me, San Salvatore, with its pillars and frescoes, was a highlight of the visit. Beneath it is a crypt, a shadowy place that looks much as it must have done in the 8th century. And above is the Coro delle Monache (Nuns’ Choir), full of frescoes and funerary monuments, including the 16th century Martinegro Mausoleum. ...... (follow the instructions below for accessing the rest of this article).
This article is featured in the app "GPSmyCity: Walks in 1K+ Cities" on iTunes App Store and Google Play. You can download the app to your mobile device to read the article offline and create a self-guided walking tour to visit the attractions featured in this article. The app turns your mobile device into a personal tour guide and it works offline, so no data plan is needed when traveling abroad.