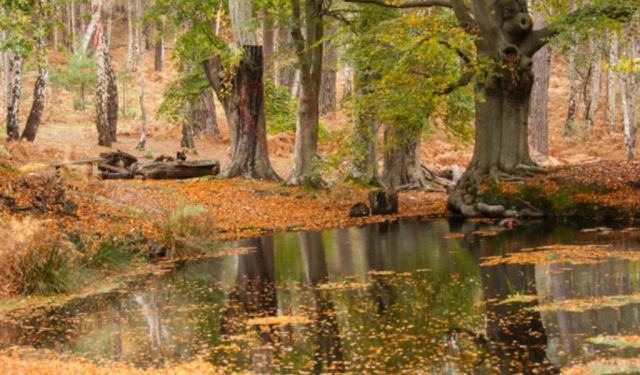 I was browsing through my photos when I came across this image and it reminded me of a very special walk on the island of Brownsea in Dorset to watch the red squirrels gathering nuts for the winter. And we did actually see red squirrels busy in the woods that cover a large proportion of the island.

Brownsea island is situated in Poole Harbour the largest natural harbour in Europe and only accessible by boat, distinctive yellow boats from either Sandbanks or Poole quay. Although the island is closed to the public during the winter months the National Trust, the owner of the island, does organise some special events such as Christmas walks on the island and Bird Cruises around it. Check their website for dates of forthcoming events.

Strategically placed at the mouth of the harbour the island has a fascinating history that ranges from military stronghold, industrial site and stately home before attaining its present state, a sanctuary for wildlife.

The island has been inhabited since the fifth century BC and the earliest evidence of human activity, two sections of a log boat were recovered from the vicinity of the island by a dredger in 1964 can be seen in Poole Museum. This museum also has a large display of pottery for which the area was famous and in the mid-19th century Colonel William Petrie Waugh bought the island because they thought they would find high quality china clay there. In preparation to the making of their fortune they built a large pottery, a horse-drawn tram to transport the clay to the pottery, a model village, the church of St Mary and gave the island’s castle a make-over with a new Tudor-style façade, a gatehouse with clock tower and a pier with castellated watchtowers. ...... (follow the instructions below for accessing the rest of this article).
This article is featured in the app "GPSmyCity: Walks in 1K+ Cities" on iTunes App Store and Google Play. You can download the app to your mobile device to read the article offline and create a self-guided walking tour to visit the attractions featured in this article. The app turns your mobile device into a personal tour guide and it works offline, so no data plan is needed when traveling abroad.