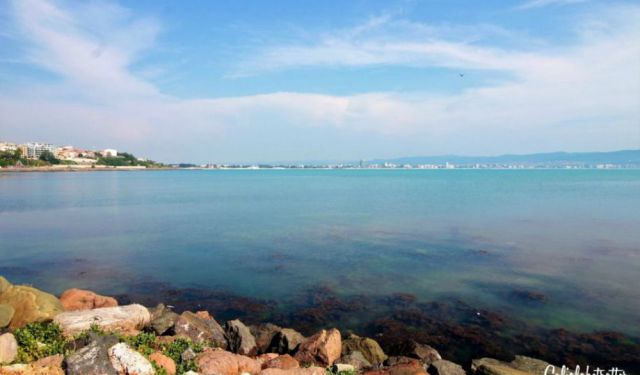 Bulgaria's Old Nessebar on the Black Sea, Nessebar, Bulgaria (B)

Set on a rocky peninsula jutting out into the Black Sea, the ancient town of Old Nessebar is one of Bulgaria’s few UNESCO World Heritage Sites. Today, it is one of Bulgaria’s most popular tourist destinations, and for good reason: it’s packed with exceptionally picturesque wooden houses and churches. The small peninsula is connected to the main land via a man-made isthmus meaning “narrow strip of land connecting two areas of land” in Ancient Greek.

Upon driving down the narrow isthmus, I could see that this was going to be a wonderful day trip from the popular Sunny Beach resorts nearby. As you cross the narrow strip of land, a wooden windmill welcomes you to this ancient town, hidden away behind the remains of the Roman Fortress walls.

Often referred to as “the Pearl of the Black Sea”, the history of Old Nessebar dates back well over 3,000 years and was once a Thracian settlement known as Mesembria. The town is often referred to as Nesebur or Nesebar but Nessebar is the most commonly used spelling. At the beginning of the 6th century, it became a Greek colony and a vital trading route from that point on, rivaling what is now known as Sozopol. During the Middle Ages it became a very important city when it was under the control of the Byzantines. The city’s prominence began to decline after being captured by the Turks in 1453, therefore preserving the town’s mixture of history which can be seen throughout the various styles of churches found on the peninsula.  ...... (follow the instructions below for accessing the rest of this article).
This article is featured in the app "GPSmyCity: Walks in 1K+ Cities" on iTunes App Store and Google Play. You can download the app to your mobile device to read the article offline and create a self-guided walking tour to visit the attractions featured in this article. The app turns your mobile device into a personal tour guide and it works offline, so no data plan is needed when traveling abroad.