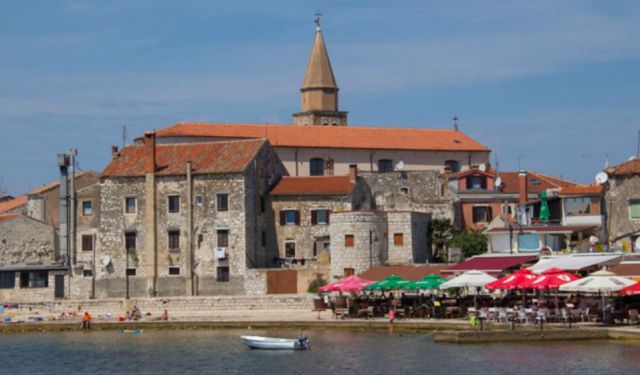 By the Seaside in Umag on the Istrian Coast of Croatia, Umag, Croatia (B)

When we arrived at our hotel, Sol Umag, in Umag on the peninsula of Istria in Croatia we were too early to check in. We were directed to the Pool Bar where we could get drinks and snacks. Outside we found ourselves right on the sea front, just a band of shady trees between us and the water. A cool breeze soothed our travel creased brows and we finally relaxed. No wonder Roman noblemen made this beautiful Adriatic coastline their holiday destination.

In early Roman times, a large number of luxurious villa rusticas (countryside villas) were built along the coast north of Umag from Zambratija to Katoro. Zambratija is now known as Savudrija. This small fishing village is a good walk from Umag along the rugged coastline and through shady pine forests and flat all the way. Katoro has been incorporated in Umag’s twenty kilometre rivieria and is one of its best beaches. It is also the site of the remains of a Roman villa. This villa was built on an island and connected to the mainland by a causeway but it is still possible to walk across the causeway at low tide. On the same stretch of coastline are the better preserved remains of another Roman villa, Villa Tiola, a luxury villa that also boasted a spa. In the same area there are the remains of other seaside villas with mosaic floors and on the seabed around Katoro there are the remains of quays and jetties. Nowadays it is hard to believe that at one time Katoro was more important than Umag. ...... (follow the instructions below for accessing the rest of this article).
This article is featured in the app "GPSmyCity: Walks in 1K+ Cities" on iTunes App Store and Google Play. You can download the app to your mobile device to read the article offline and create a self-guided walking tour to visit the attractions featured in this article. The app turns your mobile device into a personal tour guide and it works offline, so no data plan is needed when traveling abroad.