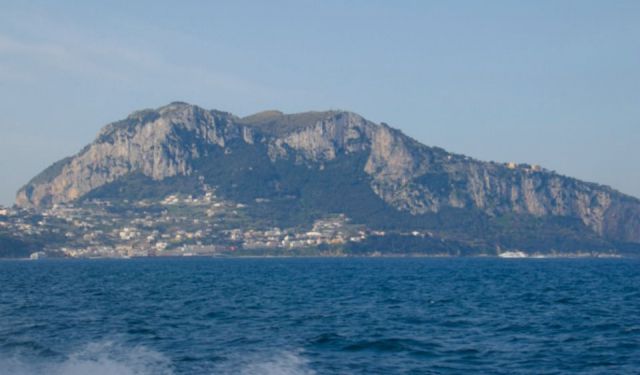 The boat was full and the only space we could find was a row of seats outside and right at the front. Soon after we set off the wind started to seriously batter us and everyone moved inside. As we pushed past each other the sticky labels our guide had thoughtfully stuck on our chests were transferred to other passengers and we had fun retrieving them from complete strangers

By the time we docked in the Marina Grand we had composed ourselves and were ready to explore the beautiful island of Capri. This pretty island can trace its origins back to the Greeks and one theory is that it was named after the Greek word Kapros, meaning wild boar but others claim the name comes from the Latin word Capreae that means goats. Caesar Augustus visited the island in 29 BC when it was owned by the City of Naples and he was so captivated by its beauty that he exchanged it for the island of Ischia in the same bay. During the reign of his successor, Tiberius, twelve villas were built on Capri. Tiberius preferred to rule his empire from a tranquil island rather than the turbulence of the mainland. Today there is only visible evidence of just one of these villas.  ...... (follow the instructions below for accessing the rest of this article).
This article is featured in the app "GPSmyCity: Walks in 1K+ Cities" on iTunes App Store and Google Play. You can download the app to your mobile device to read the article offline and create a self-guided walking tour to visit the attractions featured in this article. The app turns your mobile device into a personal tour guide and it works offline, so no data plan is needed when traveling abroad.