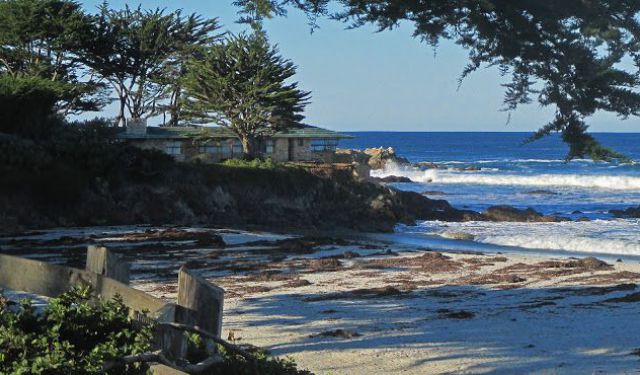 Part 2 of the Scenic Loop begins at the new public restroom at Scenic and Santa Lucia. This portion of the tour is 2 miles and will take us around Carmel Point, past Carmel River Beach and Wetlands, over to San Antonio Road and back to the Blue Gum Eucalyptus at the northwest Corner of Ocean and San Antonio where our walking tour began.

We are at the south end of Carmel Beach. Take a moment to look back at where you have been. Straight across Carmel Bay is Pescadero Point, the Lodge at Pebble Beach, and the Pebble Beach Golf Course.

Very shortly you will have a glimpse of the north side of a house built by Frank Lloyd Wright. Mr. Wright was in his 80's when he took on this project. It took him five years to build and it was completed in 1952.

Periodically this home is included on the Carmel Heritage Society annual June House and Garden Tour. I have had the privilege to tour the inside on many occasions. More pictures and history can be found at my blog post here.

At 26085 Scenic take notice of the two story modern Pueblo style house named Cimarron. According to Carmel lore, Hollywood actor Richard Dix built a Taos style adobe on the property in 1929 and named it after his film Cimarron which was released in 1931.  ...... (follow the instructions below for accessing the rest of this article).
This article is featured in the app "GPSmyCity: Walks in 1K+ Cities" on iTunes App Store and Google Play. You can download the app to your mobile device to read the article offline and create a self-guided walking tour to visit the attractions featured in this article. The app turns your mobile device into a personal tour guide and it works offline, so no data plan is needed when traveling abroad.