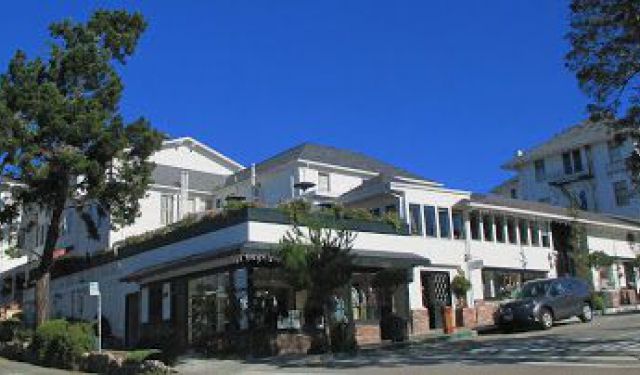 A block south of Happy Landing Inn are the next two hotels on our tour, Pine Inn (NE Corner Ocean and Monte Verde)

These two inns, which sit across the street from each other have a rather entwined history. Here is a little background.

In 1903, Hotel Carmelo was purchased by Devendorf and Powers of the Carmel Development Company. It was partially dismantled, hoisted onto pine logs, and pulled by mule down Ocean Avenue to its present site. (Devendorf and Powers wanted their guests to be closer to the beach.) The original front of the Carmelo Hotel (shown below) today faces west on Monte Verde

On July 4, 1903 the Hotel Carmelo was reopened to great fanfare as the Pine Inn. The picture below of the Pine Inn is from the first Carmel Development Company brochure early 1900's. ...... (follow the instructions below for accessing the rest of this article).
This article is featured in the app "GPSmyCity: Walks in 1K+ Cities" on iTunes App Store and Google Play. You can download the app to your mobile device to read the article offline and create a self-guided walking tour to visit the attractions featured in this article. The app turns your mobile device into a personal tour guide and it works offline, so no data plan is needed when traveling abroad.