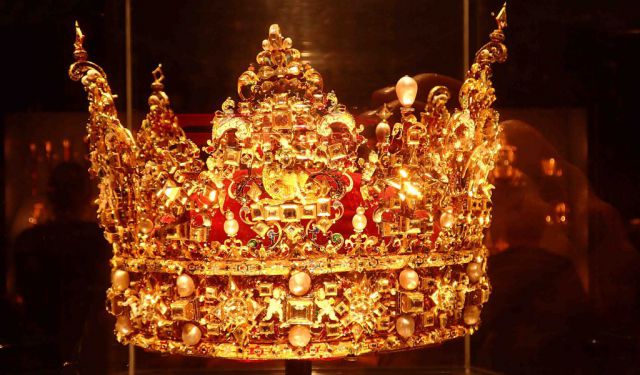 Somehow we slept in a little and got a late start to the morning though it really didn’t affect our plans. We found a not so good coffee shop by the visitor center with good pastries (though I accidentally got an almond croissant filled with rhubarb) and bad coffee.

Soon we arrived at Christiansborg Slot by the opening time at 10. The combination ticket for 120 was the cheapest option. This allowed us to visit several rooms in the castle that were nicely decorated, not too ornate, and well marked with information, along with the ruins of the other castles upon which this one was built, and the empty stables.

Given a large tour had just entered the slot, we opted to start at the slot’s basement to see the ruins of previous castles. Most of the ruins were from Absalon’s Castle and Copenhagen Castle, though two more castles were built on this site in addition to the current.

Bishop Absalon’s Castle was erected in 1167 on a small islet in the waters off the small town of Havn, now Copenhagen. The Absalon’s Castle survived frequent attacks until it was torn down by the Hanseatic League in 1369. Parts of its protective limestone wall may still be seen today. ...... (follow the instructions below for accessing the rest of this article).
This article is featured in the app "GPSmyCity: Walks in 1K+ Cities" on iTunes App Store and Google Play. You can download the app to your mobile device to read the article offline and create a self-guided walking tour to visit the attractions featured in this article. The app turns your mobile device into a personal tour guide and it works offline, so no data plan is needed when traveling abroad.