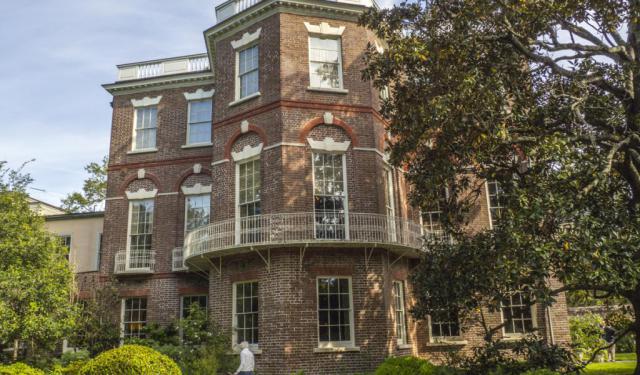 Charleston is a living architectural exhibition that fascinates and excites its visitors as they stroll through its lovely tree-lines streets or gaze up in admiration at its many church steeples.

Charleston in Charleston County, South Carolina was originally established by English colonists in 1670 and named Charles Towne after their king, Charles II. Ten years later it moved to its present site on a peninsula between the estuaries of the Rivers Ashley and Cooper. Its deep water harbour has brought trade and prosperity to the town since the seventeenth century. Wealthy merchants built fabulous houses here many of which are still privately owned. Its proud citizens have always wanted the best. It is said that if London had it then Charleston had to have it as well. As there were no natural building materials in the area facades were made to replicate different styles of building. There are also some styles that are unique to Charleston.

A typical house in Charleston is known as the Charleston single house. The narrow front of these houses face the street. The large balconies on the side of the house, known as piazzas, face south or west to catch the breeze. Although the term piazza in Italian means a public square when it migrated to the deep south during the late seventeenth century it was originally used to describe arcaded spaces in major public buildings. Today it simply refers to covered spaces such as large porches. This style of architecture became popular during the eighteenth century after the fire of 1740. Many of the houses in the residential area have been awarded the Carolopolis for excellence in exterior restoration. Most of these houses also display a brief history of the property. Stroll along Tradd Street or Orange Street to enjoy some of the most attractive houses in the town. Look out for the pretty alleys, public rights of way between the main streets, in particular Longitude Lane off Church Street. If you prefer not to walk, then let a horse and carriage take the strain. ...... (follow the instructions below for accessing the rest of this article).
This article is featured in the app "GPSmyCity: Walks in 1K+ Cities" on iTunes App Store and Google Play. You can download the app to your mobile device to read the article offline and create a self-guided walking tour to visit the attractions featured in this article. The app turns your mobile device into a personal tour guide and it works offline, so no data plan is needed when traveling abroad.