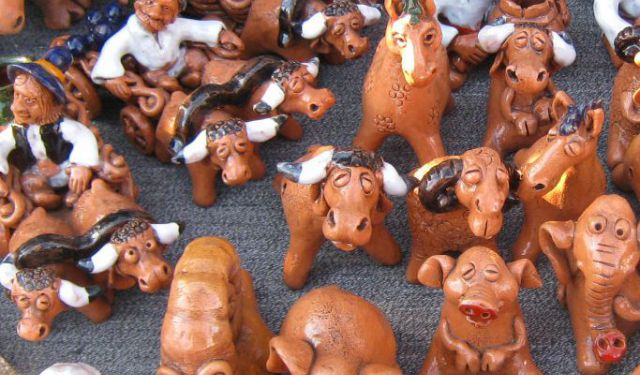 Once part of the Soviet Union, now independent Moldova is a small country sandwiched between Romania and Ukraine, of which very little is known still... To mend this, the country has recently opened its borders to the outside world. Be sure to take advantage of this opportunity and introduce yourself to the local wines, music, and many other wonderful things which make this part of Europe well-worth exploring...

Moldova is often portrayed as a maiden carrying a jug (of wine or water) on her shoulder. The jug is usually brightly painted with simple ornaments - lines, dots and circles - signature to Moldovan pottery. Pottery is one of the country's oldest trades, dating back as far as the Stone Age, and has been practiced only by men for it requires much physical strength and dexterity. Back in the old days, one of the widest-spread decoration tools was a bullhorn with goose feather attached to its tip. The paint would slowly flow down through the horn towards the tip and, from there, onto the goose feather, making it a great instrument for painting the pots. Initially, pots were made primarily as household items, but later also became largely used for decoration and religious rituals. Villagers would have thousands of pots in their houses, from massive bowls made for cooking on religious holidays, to all sort of jugs, plates, mugs, vases, statues, flutes and even kids' toys. Some of the local cuisine dishes are even named after the pots they are cooked in, e.g. Ghiveci, a traditional Moldovan stew prepared in a closed ceramic bowl in an oven. ...... (follow the instructions below for accessing the rest of this article).
This article is featured in the app "GPSmyCity: Walks in 1K+ Cities" on iTunes App Store and Google Play. You can download the app to your mobile device to read the article offline and create a self-guided walking tour to visit the attractions featured in this article. The app turns your mobile device into a personal tour guide and it works offline, so no data plan is needed when traveling abroad.