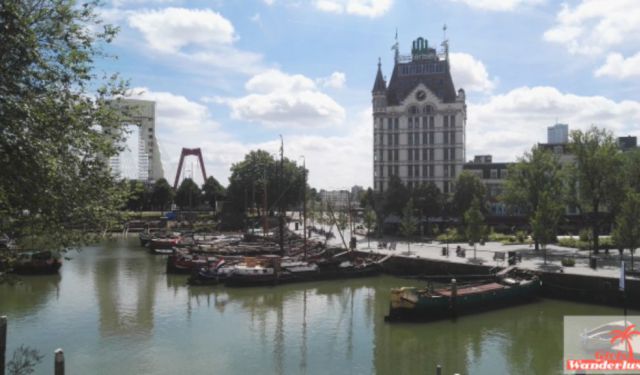 I love to make daytrips in my home country! Although I was born and still live in the Netherlands, I absolutely haven’t seen everything yet from the country. A few weeks ago, I spend a day at the modern city Rotterdam. The city has become more popular by tourists in the last few years and I can definitely see why! Find in this article the places you shouldn’t leave out during your visit to Rotterdam.

In 1940, most of the city of Rotterdam was destroyed by the German air attacks during World War II. After the war, the city has been rebuilt and re-planned with modern shopping streets, residential districts and high-rises. This makes the city one of the most modern and architecturally interesting cities in Europe. Besides the fact that the city is very modern, it has also one of the world’s largest port. Many cruise ships are entering the port, same as the ships which are transporting goods.

The Euromast is a 18 meters high tower which was been built in 1960. The tower features two restaurants which are unique because of their amazing views over Rotterdam. If you’re looking for some adventure, there is a possibility to abseil down the building. Furthermore, there are also two suites which you can book and stay at; these suites are located at the 100 meters point! ...... (follow the instructions below for accessing the rest of this article).
This article is featured in the app "GPSmyCity: Walks in 1K+ Cities" on iTunes App Store and Google Play. You can download the app to your mobile device to read the article offline and create a self-guided walking tour to visit the attractions featured in this article. The app turns your mobile device into a personal tour guide and it works offline, so no data plan is needed when traveling abroad.