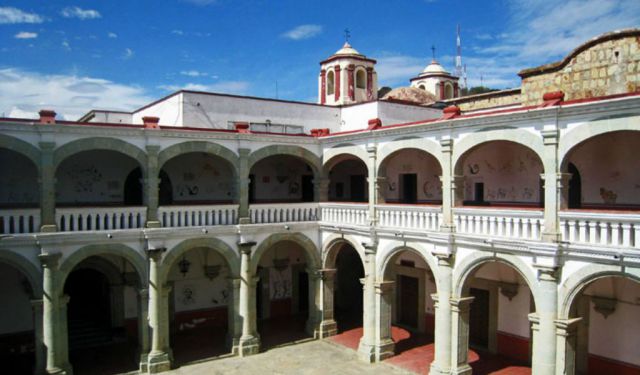 Oaxaca has a number of interesting archeological sites scattered around the state. While some may not be grand and exciting, they do make for a pleasant couple hours of exploring. One such place is Mitla. This site is a little bit further away from Oaxaca City than Monte Alban as it is about 44km away from the city. Mitla was the main religious center of the Zapotec culture (Monte Alban was the main political center) – even its name denotes the ultimate reason why religions exist: death. Mitla comes from the word Mictlán which means place of the dead. It should be of no surprise that the conquering Spanish apparently decided the word actually meant “hell”.

Mitla got its start at least 19 hundred years ago but its peak was between 750 and 1521 A.D. When the Spanish arrived, things changed. Since the site was important to the conquered people, the Spanish did their best to destroy it. As such, not much is left today. Still, there is enough remaining to give you an idea what the place would have looked like in its heyday. You can admire the tombs, carvings, geometric designs, mosaic fretwork, and a fence made by giant cacti. ...... (follow the instructions below for accessing the rest of this article).
This article is featured in the app "GPSmyCity: Walks in 1K+ Cities" on iTunes App Store and Google Play. You can download the app to your mobile device to read the article offline and create a self-guided walking tour to visit the attractions featured in this article. The app turns your mobile device into a personal tour guide and it works offline, so no data plan is needed when traveling abroad.

Pubs and Clubs of Oaxaca

Oaxaca is a very artistic city, full of musicians and artists trying to get their revolutionary message out. It has a few salsa joints but Oaxaquenos would rather be heard. There are some fantastic funky little pubs that have live music or even at times poetry readings. Later on in the night you can...

A Taste of Oaxaca

Mexican food is world famous but what most people do not know is most of that distinctly Mexican food comes from Oaxaca. Many famous chefs come to this city to study the art of Mexican cuisine, including top chef Susana Trilling who now calls Oaxaca her home. This tour highlights the best Oaxaca has...