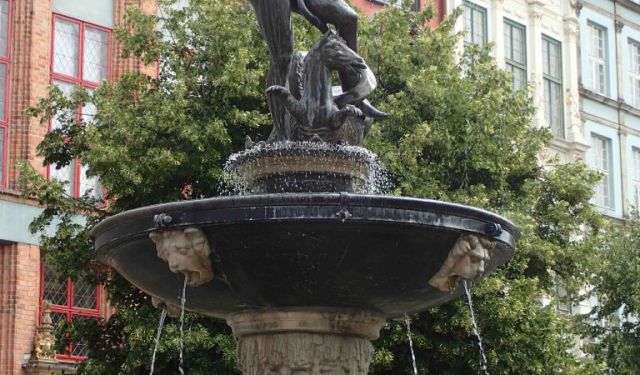 The skies were clear when we awoke today and the forecast called for mostly sunny in Gdansk, Poland. While I was hopeful, the barometer in my head suggested otherwise. My head turned out to be right. The day turned colder and wetter by the hour, though fortunately we were able to get most of our tour in before the drizzle.

Suman and I began our tour at 8:15. Our red carpet exit led us to a bus which drove us 15 minutes to our kayaking destination. After we were all fitted for life jackets which went very quickly, we separated into pairs, picked a paddle and climbed into our two-person kayaks. Once the kayak owner and guide loaded into their singles, we were ready to go except 90% of the group appeared to be novices holding their paddles upside down or backwards. I suggested to our guide that he might give a demonstration to help a few folks out.

From there, we began paddling down the Motlawa River. We completed a figure eight around two islands while passing by sailboats, restaurants, historic ruins, and the busy city center. Our guides did not tell us what anything was while we were kayaking, so that is all I can say, except that we had nice hour workout that didn’t require walking. ...... (follow the instructions below for accessing the rest of this article).
This article is featured in the app "GPSmyCity: Walks in 1K+ Cities" on iTunes App Store and Google Play. You can download the app to your mobile device to read the article offline and create a self-guided walking tour to visit the attractions featured in this article. The app turns your mobile device into a personal tour guide and it works offline, so no data plan is needed when traveling abroad.