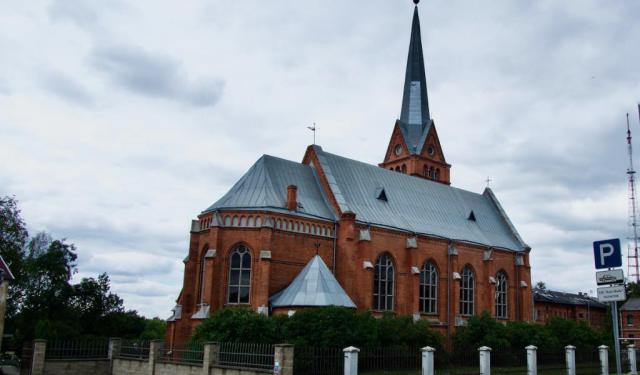 Daugavpils in Latvia – a River, a Fortress, a Lily, Daugavpils, Latvia (B)

On a recent visit to Latgale in northern Latvia I arrived with no idea what to expect. What I found was a wealth of culture, history, and traditions. Especially in the regional capital, Daugavpils.

Daugavpils, the second largest city in Latvia. It is the main town in the region of Latgale. The town has a coat of arms featuring a river, a fortress and a lily. These three symbols represent important aspects of this remarkable city. It was built on a bend in the River Daugava, it is protected by a fort and it is famous for its religious tolerance. There has been a settlement here since the Middle Ages when German crusaders conquered Latvia for the first time. Since then the town has been occupied by Russia, Germany and the Soviet Union. This heritage is apparent in some of its most important buildings and museums.

I began my tour of the town at St Peter’s in Chains Roman Catholic Church. The original church was built in 1849 but it was rebuilt between 1924 and 1934. This colonnaded church is a small scale replica of St Peter’s Basilica in Rome. It is surrounded by lovely gardens featuring an interesting collection of sculptures. Beyond the church is Dubrovin Park. This park is named for an ex-mayor of the town, Pavel Dubrovin, who was responsible for its creation. He can still be seen walking his dog through the park, close to an impressive fountain. ...... (follow the instructions below for accessing the rest of this article).
This article is featured in the app "GPSmyCity: Walks in 1K+ Cities" on iTunes App Store and Google Play. You can download the app to your mobile device to read the article offline and create a self-guided walking tour to visit the attractions featured in this article. The app turns your mobile device into a personal tour guide and it works offline, so no data plan is needed when traveling abroad.