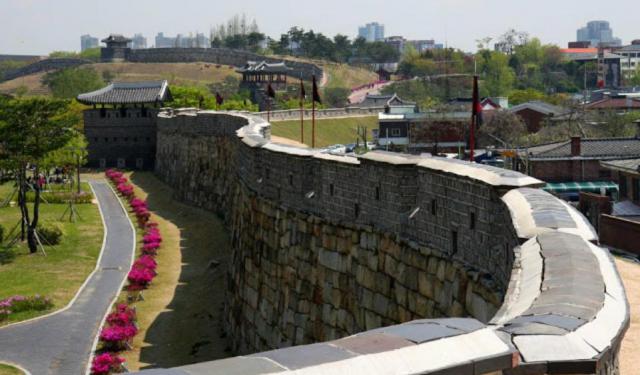 I took a an hour-long subway ride to Suwon City (in the province of Gyeonggi), about 50 km south of Seoul, to cross off another UNESCO World Heritage Site on my list: Hwaseong Fortress.

I took a bus from Suwon Station to Hwaseong Fortress. The bus driver dropped me off at the fortress' imposing south gate called Paldalmun.

From there I searched for the street to the west of Paldalmun where I would find the ticket booth marking the start of the long and seemingly neverending incline of the fortress. I stared at it and asked myself what was I doing here.

Since I had traveled so far to be here and had already paid the admission fee, I made my reluctant legs move. I slowly put one foot in front of the other, while many oldies in complete hiking attire overtook my fat ass.

The fortress is 5.7 km long and without knowing it, I had already walked three quarters of it! Along the way, I found turrets, pavilions, sentry posts, command posts, bastions, observation towers, platforms, the imposing west, north, and east gates, and great views of the city within and beyond the fortress walls. ...... (follow the instructions below for accessing the rest of this article).
This article is featured in the app "GPSmyCity: Walks in 1K+ Cities" on iTunes App Store and Google Play. You can download the app to your mobile device to read the article offline and create a self-guided walking tour to visit the attractions featured in this article. The app turns your mobile device into a personal tour guide and it works offline, so no data plan is needed when traveling abroad.