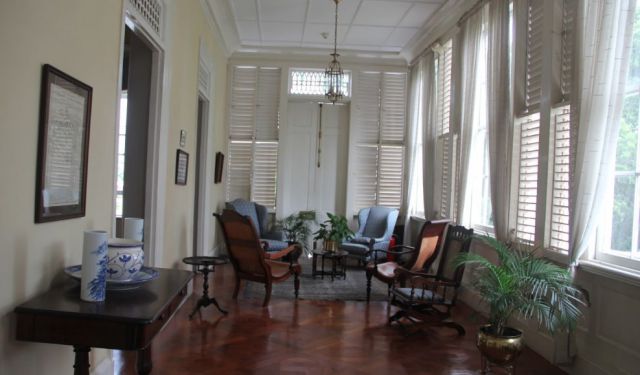 I’ve written about Devon House but only recently returned to do a tour of the Georgian style house, which is located in Kingston. Devon House was built in 1881 for George Stiebel on a property that was known as Devon Penn.

Popularly described as Jamaica’s first black millionaire, Stiebel, the child of German and Jamaican parents, was a carpenter, shipper and gun runner. He struck gold after he invested in a mine in Venezuela and made a fortune, returning to the island a rich man. Stiebel got involved in politics and business, bought 99 properties — it was illegal to own 100 or more – and built his mansion.

The house features classical Georgian lines – simple form, detailing and symmetry. It was built entirely of brick and wood with high ceilings, carved transoms over elegant doors, and ample louvered windows that circulate air efficiently throughout the house. The furniture is a mix of Jamaican, English and French antiques, and reproductions. The large 35-foot ballroom is, without doubt, the mansion’s showpiece with its Broadwood piano, Wedgwood ceiling and English chandelier that Stiebel bought. ...... (follow the instructions below for accessing the rest of this article).
This article is featured in the app "GPSmyCity: Walks in 1K+ Cities" on iTunes App Store and Google Play. You can download the app to your mobile device to read the article offline and create a self-guided walking tour to visit the attractions featured in this article. The app turns your mobile device into a personal tour guide and it works offline, so no data plan is needed when traveling abroad.