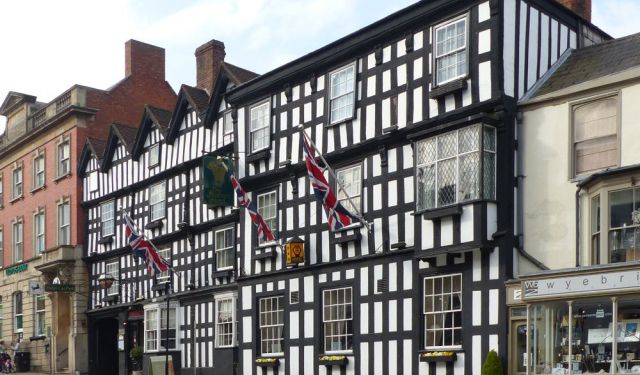 Discovering History on the Ledbury Heritage Trail, Ledbury, England (B)

From the top of the High Street I could see the old coaching inn on the left and the wooden Market House on the right. In between were dozens of centuries’ old buildings. I was following the Ledbury HeritageTrail, a half mile walk through the historic town centre, and it felt as if I had moved back in time. But it wasn’t long before I realised that the sense of timelessness was illusory. However old it appeared, the town would have looked very different in the past.

Ledbury, in the English county of Herefordshire, was built around 1125. It was an early example of a planned settlement, but the plan didn’t last for long. The town went through periods of wealth, poverty and plague, and the streets and buildings were chopped and changed to fit the shifting circumstances.

Many of the old buildings are still there but as I looked closer I could see how different the town must have been in the past. The Market House would have overlooked a noisy cattle market rather than a constant stream of cars. The narrow alleyways would have resonated to the sound of workmen’s tools, rather than the chatter of morning shoppers. And the courtyard of the Feathers Hotel would have been bustling with coaches coming and going. Of course some things never change: the inns are still full of weary travellers seeking food and accommodation for the night. ...... (follow the instructions below for accessing the rest of this article).
This article is featured in the app "GPSmyCity: Walks in 1K+ Cities" on iTunes App Store and Google Play. You can download the app to your mobile device to read the article offline and create a self-guided walking tour to visit the attractions featured in this article. The app turns your mobile device into a personal tour guide and it works offline, so no data plan is needed when traveling abroad.