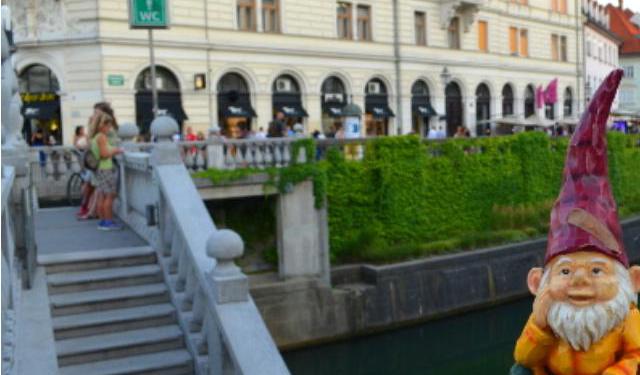 Slovenia’s capital city is equal parts adorable and equal parts cool. It’s a fairly modern city that offers plenty of beauty and fun. Though it’s fairly small, it packs a lot of things to do. These activities are the very best of Ljubljana that are not to be missed.

This adorably-named building wouldn’t be considered a skyscraper anywhere except the small city of Ljubljana. I’m a big fan of rooftop bars and Skyscraper (Nebotičnik) is a great one to end your day and watch the sunset on the city. Despite its prime location, the cafe on the 12th floor with its 360-degree outdoor terrace isn’t expensive at all. But even if you don’t want to enjoy the atmosphere and have a 3 euro glass of wine, you can go up there just to take pictures; no one really cares.

Rog used to be the most popular brand of bikes in Yugoslavia. But when its giant factory in Ljubljana shut down, it became popular for another reason. Since 2006, it’s been home to over twenty artist collectives. Rog now serves as a cultural event space and outdoor gallery that you can explore at your leisure. Don’t be creeped out by the abandoned element of it. The sculptures and graffiti are all outside in the courtyard, and even families come to check out the art. Inside the building, you’ll find a skate park and concert hall among the artist studios. ...... (follow the instructions below for accessing the rest of this article).
This article is featured in the app "GPSmyCity: Walks in 1K+ Cities" on iTunes App Store and Google Play. You can download the app to your mobile device to read the article offline and create a self-guided walking tour to visit the attractions featured in this article. The app turns your mobile device into a personal tour guide and it works offline, so no data plan is needed when traveling abroad.