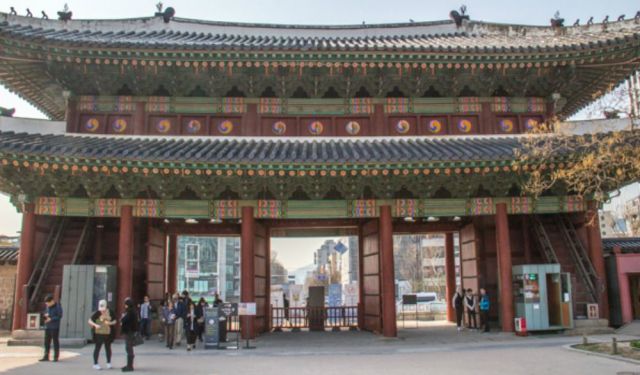 South Korea has emerged from the tragic Korean War like a butterfly from a chrysalis – colourful and beautiful. And Seoul is its flagship, bursting with history and traditions. I was lucky to have a Korean guide who gave me a good insight into the Korean way of life. Ellison was born and raised in a village not far from Busan but now lives in Seoul. Guiding is not an easy job but Ellison had just the right mix of information, humour and companionship – the whole experience was interesting and fun.

My tour started at Changdeokgung Palace one of five great palaces built by the Joseon Dynasty or Chosŏn dynasty. It replaced their first palace, Gyeongbokgung Palace built in 1405 as the principal palace for many kings of the Joseon Dynasty. Changdeokgung Palace is the best preserved of the five remaining royal Joseon palaces but this is not the original building. That was burned down by angry citizens in 1592 when the royal family left Seoul during the Japanese invasion of Korea. It was thanks to Gwanghaegun, the fifteenth king of the Joseon Dynasty, that the palace was restored in 1611. Soon after entering the palace I noticed a lot of fine mesh around the roofs of the buildings. When I mentioned this Ellison told me that it was to prevent birds nesting in the nooks and crannies and the fledglings maybe getting stuck up there and dying. Traditionally the king was the only person who could die in the palace. Therefore, should a visitor or an employee collapse in the palace they will be removed as quickly as possible – just in case. ...... (follow the instructions below for accessing the rest of this article).
This article is featured in the app "GPSmyCity: Walks in 1K+ Cities" on iTunes App Store and Google Play. You can download the app to your mobile device to read the article offline and create a self-guided walking tour to visit the attractions featured in this article. The app turns your mobile device into a personal tour guide and it works offline, so no data plan is needed when traveling abroad.