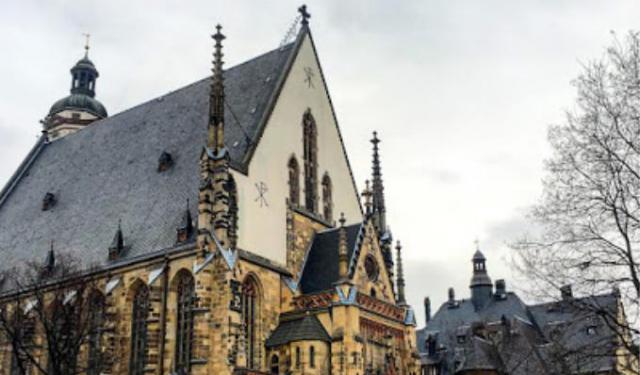 Do the Leipzig-Zag, Leipzig, Germany (B)

I think Leipzig is one of those great cities that is usually experienced as an after-thought or out of convenience. It's not on most people's Germany tours or itineraries, but that doesn't mean it doesn't have amazing things to offer! My husband and I spent a drizzly March day in Leipzig, and I know for sure that it's also a fabulous Christmas market to come to in December. I was thrilled to find a "Winter Market" in Augustusplatz (basically a Christmas market...not at Christmas!), and we had delicious meals while learning a lot of history.

We chose to start our tour of Leipzig in the southern part of the city. The massive Monument to the Battle of the Nations is in a large cemetery and a tribute to the battle when Napoleon was defeated by an alliance of countries in Leipzig. It's impressive from every angle, and worth the while to take a stroll around the huge green space.

Retro and interesting Hotel Seeblick was our selection for lunch, but our other great option would have been the Bayerischer Bahnhof Gasthaus & Gosebrauerei, a restaurant in a former train station. Seeblick serves breakfast basically all day, and has one of those menus with so many incredible options that you don't want to just pick one. Most of the breakfast plates are themed by country, so the international cuisine with a German twist was very creative and fun to decide between! ...... (follow the instructions below for accessing the rest of this article).
This article is featured in the app "GPSmyCity: Walks in 1K+ Cities" on iTunes App Store and Google Play. You can download the app to your mobile device to read the article offline and create a self-guided walking tour to visit the attractions featured in this article. The app turns your mobile device into a personal tour guide and it works offline, so no data plan is needed when traveling abroad.