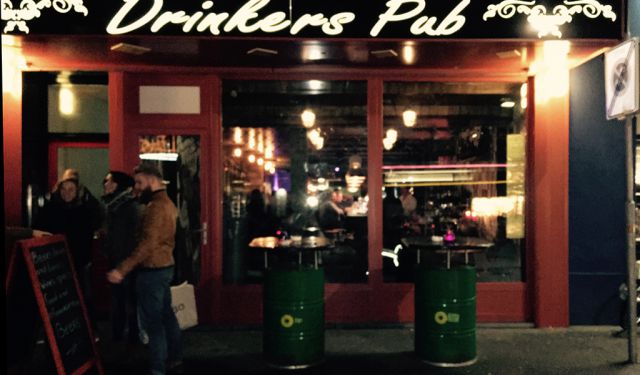 This weekend was enjoyable in Eindhoven despite of the cold and rain. On Saturday evening, I have headed toward Kerkstraat to meet to try out a brewery called “Drinkers Pub, the Oldskool beer factory”. As it could be understood from the name, Oldskool is a brewery located inside the pub.

Oldskool is a Dutch brewery which values brewing beers in a classical way more German and British way, without herbs and sugar. Their motto is “Specialty beers are good, but craft beers are better.” Recently it is serving its beers for beer-lovers since 2013. From the outside, it is difficult to guess presence of a brewery inside.

Drinker’s pub is crowded in Saturday evenings however there was an available seat for most people. Drinker’s pub is really spacious especially when you compare to the other places in Eindhoven such as “Beer Professor”. The bar counter grasped my attention because it was really long, which I think is a good thing that there is plenty of space for people who want to socialize on a bar counter when enjoying their drinks. ...... (follow the instructions below for accessing the rest of this article).
This article is featured in the app "GPSmyCity: Walks in 1K+ Cities" on iTunes App Store and Google Play. You can download the app to your mobile device to read the article offline and create a self-guided walking tour to visit the attractions featured in this article. The app turns your mobile device into a personal tour guide and it works offline, so no data plan is needed when traveling abroad.