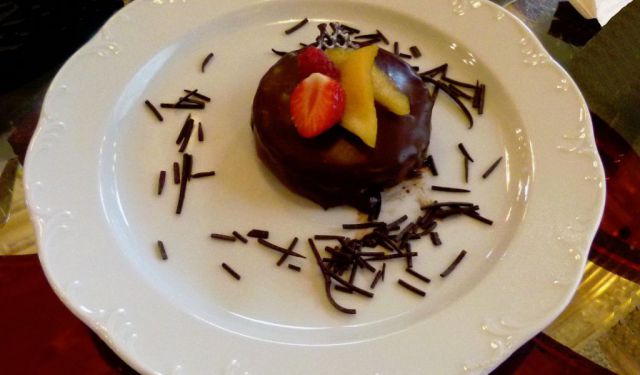 Gone are the days when Eastern Europe conjured up an image of bland and tasteless food. Today you can eat very well in Hungary, with the capital city, Budapest, offering the best of national and international cuisine.

Hungarian food is characterised by paprika, yoghurt and dumplings. Main meals tend to be based around meat, in soups and stews, or grilled with potatoes and vegetables. Fish is plentiful, too: mostly freshwater varieties, as Hungary is landlocked. You will also see influences from neighbouring countries, such as the sauerkraut (fermented cabbage) that is common in Germany, and Russian blinis (small pancakes). Perhaps the best known Hungarian dish is goulash, a thick soup of meat and potatoes with vegetables and lashings of paprika.

Vegetarians are not particularly well catered for, though some restaurants do include vegetarian dishes (often mushroom based), but you can usually find a tempting plate of mixed local cheeses with fruit and preserves. Desserts are often substantial, and include pies, dumplings and pancakes, often with fruit or cottage cheese. Hungary has a number of local wines and beers that you can enjoy with your meal. The abundance of thermal springs also means that a wide variety of mineral waters is available. ...... (follow the instructions below for accessing the rest of this article).
This article is featured in the app "GPSmyCity: Walks in 1K+ Cities" on iTunes App Store and Google Play. You can download the app to your mobile device to read the article offline and create a self-guided walking tour to visit the attractions featured in this article. The app turns your mobile device into a personal tour guide and it works offline, so no data plan is needed when traveling abroad.