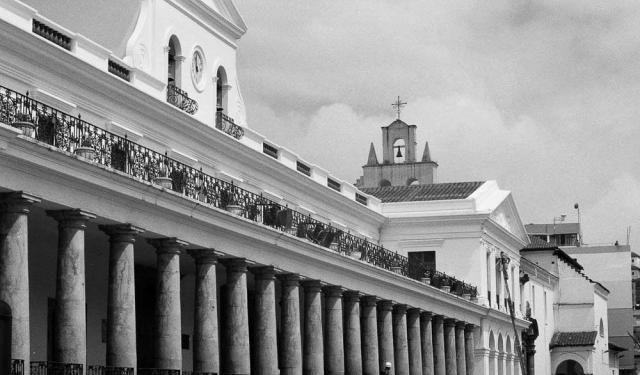 Nicknamed “Florence of the Americas”, Ecuador’s sprawling metropolis Quito is anything but a quiet and relaxing experience.

And, at an elevation of 2,850-metres, your lungs definitely feel this height in the world’s second-highest capital, after La Paz.

Situated high in the Andes and dramatically sandwiched between mountain peaks, historic Quito is still a magnet for foreign and local tourists.

Close to 2 active of Ecuador’s 19 volcanos and surrounded by 8 volcanos, Quito is built on top of the remains of an Incan city.

The excitement of busy ancient lanes and streets encrusted with shops and colourful market stalls, including Shaman healers and local hat makers thread together the intricate fibres of Quito.

Under Incan control from the mid-15th century to the 16th century, the Spanish arrived in 1534. And, so did Spanish colonial red-tiles, central patios, and balconies, all of which together with Quito’s indigenous art earned Quito the “Florence of the Americas” nickname. ...... (follow the instructions below for accessing the rest of this article).
This article is featured in the app "GPSmyCity: Walks in 1K+ Cities" on iTunes App Store and Google Play. You can download the app to your mobile device to read the article offline and create a self-guided walking tour to visit the attractions featured in this article. The app turns your mobile device into a personal tour guide and it works offline, so no data plan is needed when traveling abroad.