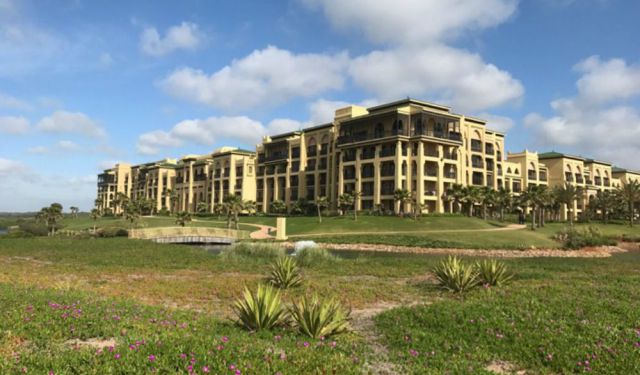 Today we took a trip to El Jadida, a coastal town 100km southwest of Casablanca. The town is an old Portuguese port with a medina that is a UNESCO World Heritage Site. The town, previously called Mazagan, was controlled by the Portuguese from 1514 to 1769 until it was taken over by Sultan Mohammed ben Abdallah.

We started our tour of El Jadida at the Portuguese Cistern which was constructed in 1514 as a warehouse that possibly held armory before it was converted to a cistern in the 16th Century. The cistern was rediscovered in 1916 by the Moroccans when a shop owner was expanding his store and water came pouring through the wall. The cistern collected water from the terraces when it rained. The damp cavern felt a little eerie, but the Gothic arches were quite lovely. Due to the reflections from the thin layer of water on the floor, many movies have been filmed here, including Orson Welles’ Othello.

After visiting the Cistern, we walked down the street to the Fortress of Mazagan. The star form of the fortress included walls eight meters high, ten meters thick, and a patrolling walkway atop them. We followed the path past old canons toward the busy fishing port and stopped to admire lovely panoramic views of El Jadida. ...... (follow the instructions below for accessing the rest of this article).
This article is featured in the app "GPSmyCity: Walks in 1K+ Cities" on iTunes App Store and Google Play. You can download the app to your mobile device to read the article offline and create a self-guided walking tour to visit the attractions featured in this article. The app turns your mobile device into a personal tour guide and it works offline, so no data plan is needed when traveling abroad.