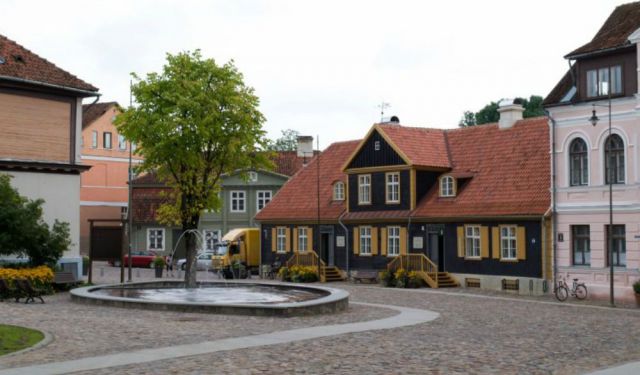 Elsewhere: Kuldiga and the Venta Rapids, Latvia, Kuldiga, Latvia (B)

Can you think of a place during the holidays that everyone seems to stop at, as they drive to and from their getaway? Somewhere to grab lunch or just pause at to break up the long drive? Well in Latvia, that stop is the small town of Kuldiga. Not exactly halfway between the popular beaches on Latvia’s southern coast and the capital Riga, Kuldiga seems like the nation’s premier rest stop. But geography isn’t the real reason people stop here. No, the real reason they stop is to admire and soak in the incredible Venta Waterfalls.

Found in Latvia’s west, Kuldīga may only be a small town but it packs a fair punch. Kuldīga only has roughly 13,000 residents but it was once an important regional town and even the capital of a Duchy for a time. Today it is one of the main tourist destinations within the region of Kurzeme, thanks to the Venta Rapids, but also its old town charm.

Let’s cut to the chase, shall we? Kuldiga’s number one attraction and the reason so many tourists stop there, is the Venta Rapids. Known in Latvian as Ventas Rumba, these falls may not be the highest or have the greatest volume, but they are the widest falls in Europe. At 249 metres wide, these rapids span the width of the Venta River that flows out to the Baltic Sea. ...... (follow the instructions below for accessing the rest of this article).
This article is featured in the app "GPSmyCity: Walks in 1K+ Cities" on iTunes App Store and Google Play. You can download the app to your mobile device to read the article offline and create a self-guided walking tour to visit the attractions featured in this article. The app turns your mobile device into a personal tour guide and it works offline, so no data plan is needed when traveling abroad.