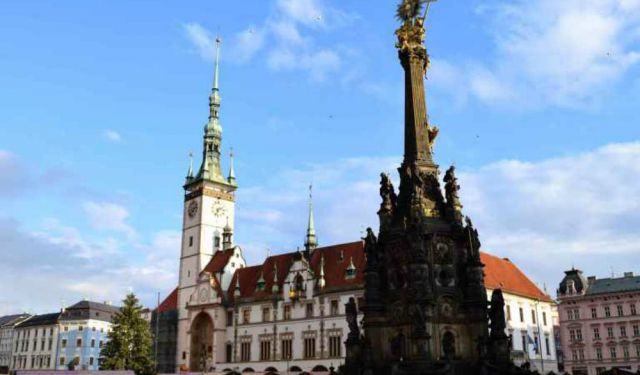 When people visit the Czech Republic it’s almost guaranteed that their destination is Prague and with good reason. Prague is a grand and vibrant city full of iconic spots. If people go further afield they might visit Cesky Krumlov, a city with a gloriously picturesque old town. But there is so much more of this intriguing country to explore. Both of the above cities are in what used to be the country of Bohemia, but the Czech Republic also consists of another former kingdom, Moravia. The Moravian part of the Czech Republic feels more subdued, but still has an elegance of its own. The city of Olomouc certainly typifies this.

Olomouc is a modest city, host to a compact old town inside some subtle city walls. For a small and little heard of place, Olomouc has a surprising number of things to see with an abundance of fountains and churches. The best place to start a visit to Olomouc is the Upper Square, the city’s heart. Here you’ll find the stately Town Hall with a beautiful astronomical clock as well as several of the city’s ornate fountains. The big landmark of the square though is the UNESCO heritage-listed Trinity Column, the largest sculptural monument in Central Europe. It’s so large, there is even a chapel inside the monument’s base. Walk in any direction from the Upper Square and you’ll find more churches and fountains. ...... (follow the instructions below for accessing the rest of this article).
This article is featured in the app "GPSmyCity: Walks in 1K+ Cities" on iTunes App Store and Google Play. You can download the app to your mobile device to read the article offline and create a self-guided walking tour to visit the attractions featured in this article. The app turns your mobile device into a personal tour guide and it works offline, so no data plan is needed when traveling abroad.