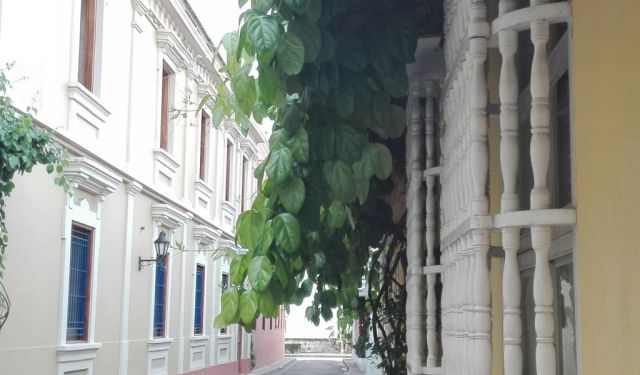 The statue of La India Catalina is one of the top landmarks In Cartagenade Indias. It is a representation of a very important aborigine woman in the history of this city.

The statue was created and sculpted in 1961 by the city artist Hector Lombana, who designed it as a handheld trophy, requested by the organizers to be the prize award for the International Movie festival of Cartagena.

In 1974, it was casted in bronze by Eladio Gil, and that is the feminine figure you can now see over the pedestal.

The winners of the now movie and television festival keep on being awarded with the small version as the prize for every category. As an analogy, it can be said that the India Catalina is like the Oscar for the Colombian audiovisual industry.

The real India Catalina was an aborigine from this area that was abducted as a child girl by the Spaniards. Then she was taken to Santo Domingo in the actual Dominican Republic, where she was raised in the European culture.

There she learned the Spanish language, the Catholicism and grew up into a young lady. When the conquistador Pedro de Heredia, was sent on a mission to explore the surroundings of this area, he brought with the expedition the beautiful Catalina to act as an interpreter with the aborigines of the zone. She knew the tribes, both languages and was of great help for the expeditionary force as she also knew the territory. ...... (follow the instructions below for accessing the rest of this article).
This article is featured in the app "GPSmyCity: Walks in 1K+ Cities" on iTunes App Store and Google Play. You can download the app to your mobile device to read the article offline and create a self-guided walking tour to visit the attractions featured in this article. The app turns your mobile device into a personal tour guide and it works offline, so no data plan is needed when traveling abroad.