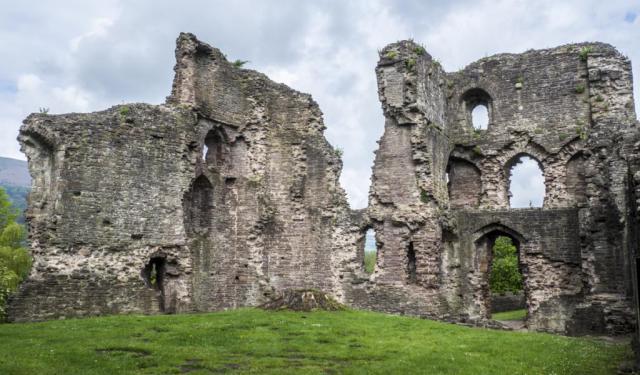 Exploring Abergavenny Beneath the Brecon Beacons, Abergavenny, Wales (B)

On arrival in Abervagenny I was tempted to head for the hills, namely the Brecon Beacons, that surround it but decided to explore the town first starting at the ruined castle, a silhouette on the mound above me as I made my way along the High Street.

The historic market town of Abergavenny in Monmouthshire, is ideally situated in the Brecon Beacons National Park. Established in 1957, it was the tenth National Park to be established in the UK as part of a campaign to rebuild a nations devastated two World Wars. The town itself was established around its castle.

Although it is now in ruins it is still possible to see why Abergavenny Castle is one of the best examples of a motte and bailey castle in Britain. It was established by a Norman lord around 1087. During medieval times it was pivotal in the struggles between English barons and Welsh princes. It has many tales to tell of this dark period. In 1089 a Norman lord invited twenty Welsh chieftains to a Christmas dinner here and then executed them all during the meal. It is still possible to make out the two defensive towers, storage cellars, encircling walls, the gatehouse and the small stone windows on the first floor. Comprehensive information boards are a great help in visualising the castle in its heyday. The original motte on the artificial mound would have been constructed from timber. It was replaced by a nineteenth century hunting lodge built by the Marquess of Abergavenny which now houses a museum. ...... (follow the instructions below for accessing the rest of this article).
This article is featured in the app "GPSmyCity: Walks in 1K+ Cities" on iTunes App Store and Google Play. You can download the app to your mobile device to read the article offline and create a self-guided walking tour to visit the attractions featured in this article. The app turns your mobile device into a personal tour guide and it works offline, so no data plan is needed when traveling abroad.