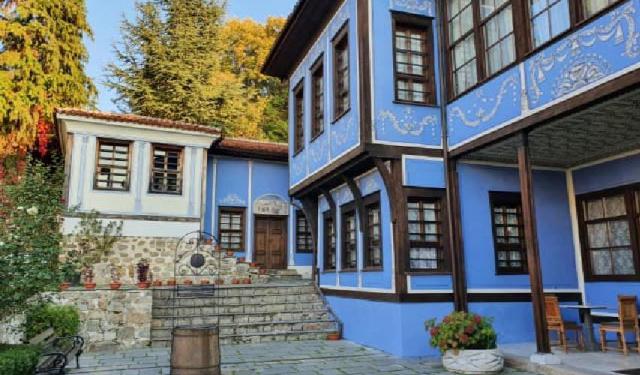 A Plovdiv old town guide showcasing its wonderful Bulgarian architecture. Plovdiv is famous for quite a few things. It is one of the oldest cities in Europe. It has some impressive Roman ruins right in the city centre. It is incredibly laid back, despite being the second largest city in Bulgaria.And it has fountains that sing!

Yet for me the highlight of my trip to Plovdiv was visiting the historic houses in its old town. These houses were built to show off the wealth and good taste of their owners. It is a very pleasing display of great design and splendid craftsmanship. But there’s more to the Plovdiv old town architecture than beautiful houses. Their style is linked to events and processes that shaped Bulgarian history.

Have you heard of National Revival Architecture? The name sounds pretty generic, but in Bulgarian culture it refers to the period when Bulgarians started to gain some autonomy from the Ottoman Empire.

Bulgaria was under Ottoman rule for nearly 500 years. The National Revival or Renaissance Period in Bulgaria was a lengthy process that took place in the 18th and 19th century, during which Bulgarians enjoyed both an economic boom and a cultural revival. ...... (follow the instructions below for accessing the rest of this article).
This article is featured in the app "GPSmyCity: Walks in 1K+ Cities" on iTunes App Store and Google Play. You can download the app to your mobile device to read the article offline and create a self-guided walking tour to visit the attractions featured in this article. The app turns your mobile device into a personal tour guide and it works offline, so no data plan is needed when traveling abroad.